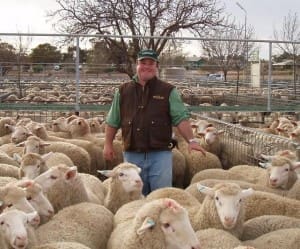 With fewer lambs on offer at CTLX-Carcoar and at Wagga, only 800 at Goulburn, and the new season turn-off barely starting in Victoria, eastern states buyers had limited opportunities to secure supplies after clearing lambs around them.

Saleyards at Wagga and Carcoar, and to a lesser extent, at Horsham and Ouyen in Victoria, were the places buyers to go to secure new season lambs in the east mid-week.

In Western Australia, lamb prices were brought back in reaction to new season over-the-hook prices around 500c/kg.

NLRS said most New South Wales contributors to its over-the-hooks table are quoting young lamb rates around 510c/kg-520c/kg cwt and old lamb quotes were generally falling, as are mutton rates.

The NLRS said nearly 1000 new season lambs were offered, mostly trade and heavy lambs. Not all the usual buyers operated in a market that improved.

The NLRS said 13,720 excellent quality new season lambs were penned, with more above 22kg cwt. Old lambs were well supplied and quality improved, with more outstanding extra heavy lambs over 30kg cwt. The NLRS said the full turnout of domestic and export buyers were eager due to the limited supply.

The NLRS said old lamb quality was quite good with increased supplies of well-finished shorter skin lambs. The majority of well-finished medium and heavy old lambs made from $81-$118 with heavy trade lambs averaging 445c/kg cwt. A single pen of heavy Merino lambs estimated to weigh 24kg cwt sold to a top price $114 with the medium trade weights averaging 387c/kg cwt.

The excellent selection of heavy and extra heavy old lambs sold up to $21 higher. Well-finished extra heavy lambs made from $125-$160 with a single pen at 38kg cwt making $170.

Mutton quality was excellent with heavy ewes and Merino wethers making up the majority of the offering. Northern buyers operating on the heavy wethers resulted in a dearer trend of $8-$12 with the better heavy drafts making $110-$130 or 330c/kg-369c/kg cwt. Heavy longer wool ewes were keenly sought by northern buyers and they made $76-$120. The limited numbers of medium weight sheep sold generally unchanged to a few dollars dearer.

Landmark Wagga agent Jarrod Slattery said major processors didn’t need as many lambs last week, but were back in buying this week, having cleared kill space.

“We had a day (Thursday) when all major processors needed a few.

“Wagga had the worst of it last week.”

Mr Slattery said Fletcher International also had an impact on the market, buying 25-26kg suckers for $130-$140 and securing a lot of sheep.

The NLRS said the quality of old lambs was plain to average, with just the odd pens of good quality still available. No young lambs came forward. Sheep were more mixed this week, with heavy to extra heavy weights not as dominant. Prices for lambs varied around the lower levels of last week but sheep averaged $5-$8 cheaper.

The NLRS said most of the regular buying group operated keenly in a firm to dearer market.

The NLRS said there was a reasonable selection of new season lambs yarded, along with lightweight Merino lambs and hoggets. Well-finished old lambs were in limited supply. All the regular buyers were active.

The NLRS said mutton quality was not quite as good, though there were some good lines of well-finished ewes. Much of the mutton penned were plain conditioned ewes suitable for the boning rooms and restockers. Wethers were in limited supply.

The plainer conditioned ewes were $2-$4 cheaper, with 2 score Merino ewes to the processors selling from $42-$77.40. Restockers paid $44-$88 for ewes to go back to the paddock. Medium weight trade ewes were $5 cheaper, selling from $65-$85, while prime conditioned heavy weight ewes fell $6 and sold from $82-$95.50. Heavy weight crossbred ewes made $72-$90. Limited numbers of wethers sold at similar prices, with the medium and heavy weight Merinos to the processors making $72-$95. Restockers were active on suitable lines of wethers and paid from $25-$78. The live exporters were also more active this week and paid from $69-$85 for wethers. The ram market was similar, with processors paying to $45 for Merinos and to $15 for crossbreds.

Elders Katanning agent Russell Mackay said butchers have started operating at the new season hook prices around 500c/kg. Despite the cheaper prices quoted for mutton this week, he said but very light boning ewes sold very strongly. The lack of lambs for restockers will be a problem in the future, with lambs over 12 kg dressed now going to slaughter, he said.