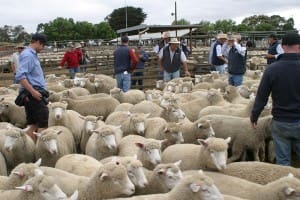 The Kerr and Co Livestock team led by auctioneer Craig Pertzel, centre, sold the Konongootong Poll Dorset stud’s 180 lambs for $144 or 560c/kg cwt to JBS Australia at Hamilton on Wednesday. The lambs had an estimated carcase weight of 24kg with a $10 skin.

At Wagga on Wednesday, lamb prices — driven by domestic buyers competing with exporters for good quality shorn supplementary-fed lambs — jumped by up to $20 to reach carcase weight levels well above 500c/kg. Other markets also sold lambs above the 500c/kg cwt mark.

With fewer heavier shorn lambs coming back into the system this year, trade buyers are being forced to select from quickly diminishing supplies of fresh trade and heavy weight lambs that are not affected by dryness or grass seed.

The National Livestock Reporting Service said some lamb and sheep markets also moved higher this week in response to widespread showers, but that the most recent three month rainfall outlook issued by the Bureau of Meteorology (BOM) suggested a hot and dry summer ahead – indicating the high turn-off, likely to be met with limited restocking interest, will continue.

The NLRS said despite the seasonal rise in saleyard numbers and slaughter, most indicators made ground this week, with the Eastern States Trade Lamb Indicator finishing after Thursday’s sales at 479c/kg cwt, up four cents on Wednesday, and the heavy lamb indice was at 484¢/kg cwt, up five cents. The mutton indicator was up four cents to 293c/kg.

The other eastern states lamb indicators also increased, with restocker lambs at 473c/kg, up three cents; Merino lambs at 407c/kg cwt, up 22 cents and; light lambs at 447c/kg, up two cents.

The NLRS said most lamb indicators remain above the five-year average and the high turn-off is anticipated to continue. Reports of a greater proportion of lighter lambs coming through suggest tighter availability mid-next year. Encouragingly, the international demand for the surging supplies has been underpinning the markets and is likely to remain strong, the NLRS said.

The NLRS said the good quality yarding had good numbers of trade and heavy weight new season lambs along with more light weight lines lacking finish and weight. All the regular buyers competed in a solid market.

The NLRS said the consignments of mostly new season lambs comprised mostly light and trade weights along with a fair portion of heavy weights. While nearly all the new season lambs remained unshorn, many skins showed dryness and increased seed infestation.

It was a variable market trend. Light lambs lifted by up to $10, while trade and heavy weights were firm to slightly cheaper. Lambs to restockers, including a percentage of trade and heavy weights, were $2-$5 dearer. Light restocking lambs up to 18kg cwt made from $69-$94, with heavier weights sold up to $108. Light processing lambs ranged from $66-$93, with trade weights from $89-$104. A few heavy weights reached $109 for most slaughter lots to average from 435c/kg-465c/kg cwt.

The smaller mixed quality sheep offering had plenty of lots in heavy condition. It was a firm to slightly cheaper market with medium and heavy ewes making $50-$100, while very heavy crossbred wethers reached $108.50. Most of the slaughter mutton averaged 275c/kg-315c/kg cwt.

Heavy lamb prices improve up to $20 at Wagga

The NLRS said quality was mixed with more longer-wool secondary lambs in plainer condition. Shorn young lamb numbers doubled this week, along with increased supplies of supplementary fed lambs above 26kg cwt. These lambs offered buyers weight and yield which helped lift prices up to $20 higher. The usual contingent of domestic and export buyers were competing in a dearer market.

Mutton numbers increased and quality was mixed with all weights and grades represented. Merino ewes suitable for the trade were well-supplied, and prices were $2 dearer. Medium weight sheep made from $60-$90 to average from 272c/kg-302c/kg cwt. Heavy sheep were in reasonable supply and not all northern processor operated fully. Heavy mutton sold $4-$7 higher to average 281c/kg-332c/kg cwt. A run of heavy Merino wethers in full wool reached a top price of $114.20, to average 311c/kg cwt.

In Victoria at Hamilton on Wednesday, agents yarded 42,149 lambs, 7290 fewer than the previous Wednesday.

The NLRS said all the regular buyers attended the sale, plus an extra heavy export and trade lamb buyer, assisting prices in the market. Restockers from southern NSW, northern Victoria and SA border areas, combined with local agents, continued to compete with the processors throughout the sale on light weight lambs, again lifting prices $2-$5. However, this did fluctuate at times as some sold to last week’s prices. The biggest jump in price was seen for the better quality heavy 3 and 4 score lambs and the heavy export lambs, at $8-$10 dearer. More of these were penned this week. Overall quality was very good, while there were also some well-bred lighter lambs.

The NLRS said most of the regular buyers competed for the average quality lamb yarding. Competition was keen with most lambs selling to a dearer trend to be from $2-$7 up on last week and more on some selected lots. Several pens of light trade shorn lambs were offered, and they sold from $80-$104 at around 500c/kg cwt. Restockers were quiet but did pay from $66-$84.50 for lambs and from $70-$77.50 for Merino and crossbred ewes.

At the Hamilton saleyards on Thursday, the agents yarded 13,279 sheep, 4481 fewer than last week.

The NLRS said the good to average quality yarding of sheep contained more light weight mutton. The sale consisted of about 60 percent ewes and 40pc wethers. All the usual field buyers operated at stronger levels. There was no restocker activity, with prices in places $3-$5 dearer for the heavier sheep. The medium weight range also lifted $4-$8 and the light sheep were $3-$5 dearer.

The NLRS said lamb quality and weight improved, as did prices, with bidding from extra domestic and restocker buyers. The buoyant market saw some spirited and animated bidding with the significant competition among the trade and processors not allowing restockers to purchase any significant numbers. Returns for vendors jumped by $8-$10 across the whole lamb offering, while the sheep were firm on last week’s prices.

Lamb prices up $ at Katanning

The NLRS said lamb quality was mixed with most being of good quality, but generally in the light and store categories. Prime lamb numbers were better with some good trade and heavy weight lines offered. Mutton supplies included a larger percentage of light and poor conditioned drafts along with moderate numbers of prime drafts. With all buyer groups active, prices were strong and most categories lifted close to $4.