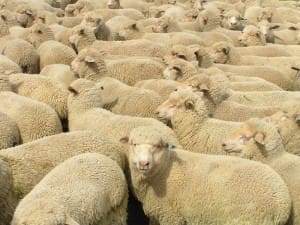 Restockers paid up to 922c/kg cwt for light 0-12kg new season lambs at Bendigo on Monday, and in other saleyards they generally paid 400-888c/kg. Demand for 16.1-18kg new season lines was also stronger, with prices ranging from 400-669c/kg.

The restockers are also pushing trade buyers off light trade young lambs, and into old lambs in some saleyards.

Despite new season trade lambs generally increasing in price this week, agents are reporting delays of up to 10 days to book lambs in to kill at most processors, and over-the-hook rates for the coming week were quoted lower by the National Livestock Reporting Service.

Elders livestock manager at Bendigo Nigel Starick said restockers were strong in Bendigo on Monday, paying up to $126, at times pushing trade buyers off 18kg+ cwt lambs. But lack of rain was drying out lambs, with many producers opting to sell rather than shear and run lambs on.

“Everyone is hitting the panic button with next week, because it is going to be 38 degrees at Mildura on Sunday and 34-35 degrees here on Monday.”

Many processors were sourcing fresher lambs from south-east South Australia, he said.

Dubbo stock agent Cleve Olsen said the patchy market opened up on last week’s rates, moving up $4-$8 in the middle of the sale, paling off to be a firm market on last week. He said processors are not prepared to lock in forward prices. They were reporting difficulty in selling lamb domestically and the export job was “very patchy”, Mr Olsen said.

“It is the physical market that is trying to hold it together at the moment.”

He said the restocker market was very strong, from 600-700c/kg, driven mainly by farmer orders.

The ESDI for mutton finished firm on 346c/kg and the national indicator is unchanged at 345c/kg.

Western Australia’s over-the-hook quotes were not available when this report was published.

The NLRS said the better quality yarding had a fair selection of new season and Merino lambs, with a limited number of extra heavy weights. All the regular buyers operated.

The NLRS said lamb quality improved. About 12,700 new season lambs were offered, including plenty of well-finished trade weights and a good number of heavy weights. There were more lighter store and Merino lambs. Old lambs were mixed in quality and fewer in number. All the usual buyers operated in a dearer market.

Sheep quality was mixed. Ewes were best supplied and the plainer medium weights eased up to $10, while the better covered 3 and 4 scores remained similar. Medium weight ewes ranged from $70-$92 and the heavy weights made $91-$110.

The NLRS said there was an improvement in overall lamb quality. Well-finished trade and heavy weights were in good supply. The extra numbers were possibly brought out due to the lack of a sale next week. The usual buyers attended.

Demand increased for all lamb classes, with quality improvements also contributing to a lift in average prices. Well-finished young lambs improved most. Restockers were active on good quality light weight lambs. There was only a small improvement, if any, in the old lambs suitable to the trade and export orders.

The quality and condition of the sheep was very mixed. The feature was a line of heavy Merino wethers carrying a 4-5cm skin. Market trends were firm to dearer.

The NLRS said there were 13,290 new season lambs and quality was very mixed. Some good lines of well-finished lambs attracted strong competition. An increased percentage of lambs showed signs of dryness and seed contamination. The usual buyers were active along with restockers in a market that averaged firm to slightly dearer, but was very erratic depending on quality.

The sheep were mostly Merinos and quality was very mixed. Light sheep sold stronger with the remainder easing. Merino ewes sold from $72-$103. Crossbreds made $70-$110. Merino wethers sold from $70-$92.

The NLRS said quality was good with mainly well-finished trade and heavy lambs offered, many off crops. A consignment of Western sheep and a large pen of young lambs were also yarded. Trade weight old lambs were well-supplied and there were several pens of heavy lambs.

Despite the good quality yarding, competition was weaker, with most lambs selling $8 cheaper. The consignment of young lambs topped at $135 and heavy old lambs sold to $147.

The sheep were mainly medium weights, with some off shears and some in full wool. The market was generally $10 cheaper, with a pen of heavy wethers selling to $102.

Most of the lift in the lamb yarding came from light weight store conditioned young lambs. One export buyer who hadn’t been competing on lambs in recent weeks rejoined bidding.

Prices for young export and trade weight lambs sold to slaughter were similar to a week ago, although carcase values increased slightly for some categories due to buyers working on reduced skin returns of $7-$9 as seed starts to appear.

The strength of the sale was store lambs, with most sales to the paddock averaging $5-$10 dearer. The market reached a top of $150 twice for heavy young lambs estimated to weigh around 28kg cwt. The supply of quality heavy young lambs was limited, with only about 12 pens in the yarding making $138-$150. The better finished trade lambs sold to domestic orders mostly made $120-$135. An estimated range of 510-535c/kg cwt covered most sales.

There was restocking orders from Ballarat, Hamilton, Kerang, Shepparton, Wagga Wagga in NSW, Tasmania and the local Bendigo area. Some southern restockers pushed into light trade weight lambs, paying $110-$125.60. The general run of light lambs to the paddock ranged from $88-$110, with the main category of 12-16kg store lambs averaging $92. Very small lambs under 12kg cwt to restockers recorded the best price gains at an average of $80.

The supply of old season lambs continued to dwindle. Prices were dearer, especially for lighter weight types as processors competed more strongly on these lambs after being out-bid by restockers on most of the lighter young lambs. Bidding for old lambs reached a top of $136.

There was a good selection of Merino and crossbred sheep in all weight categories. Prices were dearer, with heavy mutton regaining most of the previous week’s losses. Extra heavy crossbred ewes sold from $90-$105. Most of the trade weight and light sheep were $2-$6 dearer than a week ago. An average run of mutton was estimated to cost processors 330-360c/kg cwt.

The NLRS said lamb quality was average in a yarding that contained more new season lines. Most regular buyers attended, but not all operated fully in a generally firm market.

The NLRS said the generally better quality yarding of mainly new season crossbred and Merino lambs sold to stronger demand. All of the usual trade and processor buyers attended. However, one processor didn’t operate and there was a lack of domestic participation. Feeders and restockers were cautiously active and paid prices similar to last week.

The NLRS said there was a good field of buyers. Most of the increase in lambs was due to the larger penning of light weight and store conditioned grades which attracted strong processor and restocker interest. Heavy weight lambs and heavy weight sheep were not so keenly sought after.

The NLRS said 3800 new season lambs were yarded, included some pens of shorn new season lambs, but quality slipped. Competition was limited across the sale with prime lambs the only bright spot, these improved $5 with other.

Wether prices were lower, with moderate live exporter activity. Bare shorn export weight wethers made from $80-$100. Those with longer wool made up to $116. Restockers and feeders paid $50-$102 for lighter conditioned and store wethers, with most around $6 easier. Ram prices also eased, with best ram lambs making to $95 and young drafts suitable for export orders $30-$85, back close to $8. Old ram prices also slipped, with most making $10-$30.

At the northern Tasmanian saleyards on Tuesday, the agents yarded 700 lambs, 265 more than last week, and 300 sheep, 20 fewer.

There was a larger yarding of lambs at Powranna and Killafaddy on Tuesday with fewer heavy pens and more store types. Apart from two half pens, all were old lambs and with less export competition, heavy trade and heavy pens sold $10-$15 cheaper. Light trade types were unchanged. Restockers bought light lambs for $76-$86 and trade types for $98-$101. Exporters paid $58-$82 for light lambs. Light trade lambs sold for $99-$101, trade weights for $110-$124 and heavy weights for $119-$137.