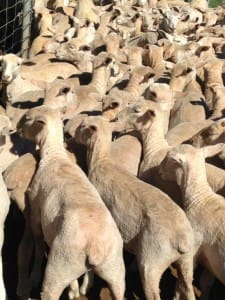 Quality medium to heavy trade lambs and heavy weights sold from 567-626c/kg cwt at Forbes and 550-610c/kg at Ballarat, and generally averaging from 540-570c/kg in other centres.

Supply will be the issue

Landmark national livestock manager Mark Barton believed there were not sufficient supplies of quality slaughter lambs available for prices to come back going into winter, despite export processors cutting kills and closing plants.

“I just think supply is going to be the issue – if you have got them you are going to get paid for them this year.

“But you don’t want either party having the boot on and putting the slipper in,” he said.

“Though it is also about getting kill space at this time of the year.”

The National Livestock Reporting Service’s Eastern States Daily Indicators for lamb closed in firm or positive territory for all categories after Tuesday’s saleyard sales. The lamb ESDIs are: restocker, 552c/kg, no change; Merino, 503c/kg, up 5 cents; light, 534c/kg, up 2 cents; trade, 563c/kg, up 8 cents; heavy, 563c/kg, up 6 cents. The national trade lamb indicator closed up 7 cents to 564c/kg and the heavy lamb indice is at 564c/kg, also up 7 cents.

Over the hook trade lamb rates firm to dearer

In NSW, the NLRS said over-the-hook lamb rates this week held firm across all categories. Mutton rates eased slightly. However, many contributors are taking a wait-and-see approach after last week’s dearer saleyard prices.

In Victoria, the NLRS said there were some upward adjustments to lamb over-the-hook rates this week, with light and trade weight categories making the most gains. Mutton rates were mostly firm.

Western Australia’s over-the-hook rates for the week were not available when this report was published.

The NLRS said the quality of the lamb offering was fair to good with good supplies of medium and heavyweights, and of lambs suitable for restockers. A full field of buyers operated. Market trends were generally firm to dearer for lambs, with strong demand for all weights.

The quality of the sheep offering was only fair with limited numbers of well-finished heavy weights available. The market remained close to firm with quality variations impacting on some price changes.

The NLRS said lamb quality remained similar to previous sales, with good numbers of well-finished lambs and plainer types. The usual buyers competed with restockers in a dearer market.

The NLRS said lamb quality generally declined, with fewer well-finished trade and export weight lambs. Prices continued to fluctuate with quality a factor in some results.

The market reached a top of $179 for extra heavy export lambs, but there was little price movement in this category with odd pens weaker at times. The market improved $2-$6 for 24-26kg cwt lambs, as some of the major domestic buyers pushed into heavier weights to access more quality and finish.

Light weight lambs were of a plainer standard this week and the secondary types dragged down price averages. Select pens that suited MK export orders still sold strongly at more than $90. There was a bigger line-up of Merino lambs and the better-covered types were dearer at $93-$120. The general run of trade weight lambs sold from $106-$125, to be firm to a few dollars dearer in places. Bidding for the lead runs of 24-26kg cwt lambs was boosted by domestic competition as some of the major buyers pushed into heavier weights, with most sales from $135-$149. Demand for export weight lambs was patchy despite the limited numbers on offer and several pens of extra heavy weights sold from $165-$179.

Not all the usual processors operated on the sheep offering and prices trended lower. Lightweight sheep were most affected by the weaker demand. Heavy crossbred ewes sold from $102-128 and Merino wethers in a big skin sold to $122.

The NLRS said the yarding crossbred and Merino lambs failed to match the quality of last week’s offering, but sold to solid competition from the usual buyers and one new Victorian operator. There was limited feeder competition and restockers operated keenly on light weight Merinos.

The NLRS said a smaller field of trade and processor buyers was active and there was a small restocker presence. Prices generally eased across the market.

The NLRS said large numbers of secondary and store lambs were offered. Quality was mixed with some good prime lambs offered, including solid supplies of heavy weights. All buyers were active in an erratic market where price spreads were much larger than recent weeks. Prime lamb prices eased slightly, but secondary drafts were back by up to $6.

Strong competition from live exporters and feeders led to better young store lambs trending dearer. Light store merino lambs to restockers made $15-$64, up $2. Light lambs to processors, live export and feeders made $65-$98, to be $5 either side of firm. Trade lambs sold from $87-$127, with the prime drafts similar at close to 530c/kg cwt. Secondary drafts were back $3-$6, to average 500c/kg. Heavy lambs more than 25kg cwt sold to a top of $140.

The mutton yarding included more heavy weights with increased wool length. Ewe supplies increased, while wether and ram numbers were similar to last week. Most ewe rates moved slightly lower, with 2 score processor mutton back $3 to $55-$92 or 330c/kg cwt. Heavy mutton sold from $70-$100, with most sales firm to slightly easier. Restocker activity increased, with better mature ewes selling from $72-$104.50, to be up $2.