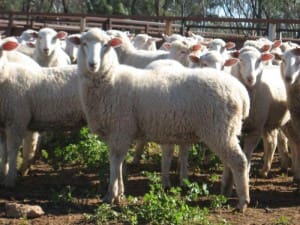 After the last of Friday’s saleyard sales, the National Livestock Reporting Service quoted most Eastern States Daily Indicators for lamb as firm to slightly lower.

An annual offering of quality Border Leicester/Merino ewes at Keith were the standout article of this week’s sheep sales with ewe lambs selling from $190-$192 and a small line of ewes scanned to White Suffolk making $170. Several lines of joined Dorper and White Dorper ewes made from $123 to $157.50.

Ewes with lambs are finding their way into the marketplace, Ms Adams said.

“Merino ewes with White Suffolk lambs sold from $158 to a top of $183 for four year old ewes with a big jacket in Victoria.”

The NLRS said numbers fell only slightly after considerable rain and snow in the area and quality was good across the new season and heavy grades. Mainly heavy weight lambs were penned, along with a handy supply of trade weights and 1300 new season lambs. All the buyers were operating and competition was solid on the new season and heavy old lambs resulting in a firm to dearer market.

The NLRS said numbers halved with widespread rain in the drawing area. Lamb quality was very mixed, with some well-finished lines offered along with the plainer types. The yarding was mostly heavy and extra heavy weight lambs. Most of the usual buyers competed in a dearer market.

In Victoria at the Shepparton saleyards on Friday, the agents yarded 956 lambs, 244 fewer than last week, and 600 sheep, 200 less.

The NLRS said the overall quality of the small winter yarding was very plain. Not all the usual buyers operated, but the lack of quality slaughter lambs was a factor in the reduced competition. The market did generally show a cheaper trend, but this was based on limited sales. One agent passed-in a few pens of lambs.

The market reached a top of $168 for a pen of six extra heavy Dorper wethers. Most of the lambs offered were plainer finished light weight types that sold from $60-$110, with odd pens of very small lambs down to $32. The few pens of better finished heavy trade weight lambs sold from $132-$157, with the best returning an estimated 570-588c/kg cwt. Only about a dozen pens of lambs sold for more than $120, reflecting the lack of weight and finish throughout the yarding. There were only a couple of small pen lots of extra heavy export lambs that sold to a top of $168, averaging less than 500c/kg cwt.

Sheep quality was also very mixed. The lead pens of extra heavy crossbred ewes sold from $110-$130 to be similar to recent markets. A big line of trade weight Merino ewes in a good skin sold from $112-$119 to match recent trends. Plainer and lighter ewes sold from $55-$88.