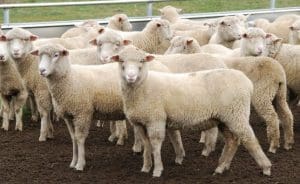 Prices for trade and heavy lambs fluctuated around quality to be generally firm in New South Wales, improving for quality lambs at Griffith, but trending lower on a per head basis at Cowra, to be almost equivalent on a carcase weight comparison.

The NLRS said it was a mixed quality lamb yarding. There were well-presented heavy and better trade lambs and some plainer lines. The first of the new season lambs were in top condition.

Mainly heavy lambs were penned, with fewer trades weights and store lines. Most buyers were operating and competition was reasonable, resulting in a firm to slightly cheaper market.

Sheep and lamb numbers on AuctionsPlus eased by 858 head to 28,685 last week. Buyer interest is still strong with the Tuesday catalogue receiving a massive 12,000 hits, and over 550 users logging into the sales this week.

Older ewes averaged $115 and made up to $140.50, for 540 seven year-old early-April shorn Gingie blood ewes from Brewarrina, NSW. These ewes were scanned in lamb to White Suffolk rams, weighed 53.9kg lwt and were mostly score 2.

Numbers of ewe-lamb units dropped this week, but prices remained strong, with an average of $180 and a top price of $228 for 595 five year-old early-November shorn first cross ewes with 685 Poll Dorset 1-3 month-old lambs, average lwt 24kg, at Euroa, Victoria. These ewes weighed in at 61.4kg and were mostly score score 2.