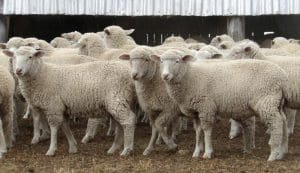 The ESDI for mutton rose 2 cents to 387c/kg on Friday, capping off a 5-cent rise for the week. The national mutton indicator lifted 1 cent to 386c/kg.

Grown Merino wethers sold to $109 to a line of 576 4-6 year-old mid-August shorn Walwa blood wethers at Bredalbane, NSW. They weighed 52.3kg and were mostly score 2.

The NLRS said sheep and lamb numbers almost doubled despite the cold and wet conditions. Lamb quality was fair though reduced slightly from the previous sales. Most lambs were heavy and extra heavy weights. Most of the usual buyers competed in the firm to dearer market.

The NLRS said lamb quality was back a little. The supplementary-fed lambs and most trade weight lambs were well-presented, but there were some plainer lines. Mainly trade weights were yarded, plus a handy run of heavy lambs. There was slightly more store lambs. All the usual buyers attended, except one. Competition was mostly solid, with most grades firm to only slightly cheaper.