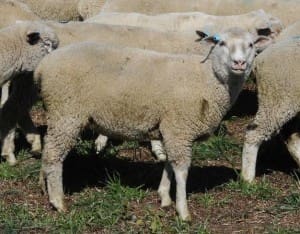 LAMBS sold mostly firm to dearer in saleyards early this week, despite larger yardings in response to recent higher prices and increasing live weights on farms and in feedlots.

Extra heavy 30kg-plus cwt lambs sold to $212 at Ballarat and heavy lambs also made more than $200 at Dubbo, Forbes, Bendigo and Dublin.

The fortnightly sales at Corowa and Deniliquin put another 14,000 lambs on the market and despite bigger yardings at the weekly sales at Dubbo and Tamworth, and 22,200 more lambs at Forbes, rates for well-finished trade and heavy lambs mostly improved.

After Tuesday’s saleyard sales, the National Livestock Reporting Service’s Eastern States Daily Indicator for trade lambs finished firm on 565c/kg and the heavy lamb ESDI rose 2 cents to 561c/kg. The other lamb ESDIs were: restocker 546c/kg, up 4 cents; Merino 520c/kg, no change; light 550c/kg, down 2 cents. The national trade lamb indicator rose 1 cent to 565c/kg and the heavy indice was up 1 cent to 560c/kg.

The ESDI for mutton rose 14 cents to 365 and the national indicator lifted similarly to 364c/kg.

In New South Wales, the NLRS said there were some upward adjustments to heavier weight lamb over-the-hook categories this week, while trade weights were unchanged. Medium and heavy weight mutton indicators were slightly higher, up an average of 3c/kg cwt.

In Tasmania, the NLRS quoted Tasmania’s over-the-hook rates for light lambs as 20c/kg higher this week and 5-10c/kg higher for medium and heavy sheep.

Western Australia’s over-the-hook rates were not available when this report was published.

The NLRS said the skin market remained steady this week with contributors leaving lamb and sheep skin quotes unchanged. The lower A$ and tighter supplies are reportedly supporting prices.

The NLRS said it was a fair quality yarding with some top heavy weight lambs and a reasonable selection of trade weights. Light weight lambs were also well-supplied.

Most grades were represented in a good quality yarding of mutton. The strong market continues, with most grades lifting a further $5-$7. The 2 score ewes sold from $35-$84. The better 3 and 4 score woolly Merinos made $73-$141 and crossbreds sold to $128s. Woolly Merino wethers sold to $135.

Market trends varied, with restocker lambs selling firm to cheaper. Quality was a factor. Good quality trade weights sold on a firm to dearer market trend, with quality contributing to price increases. Heavy weight lambs sold slightly dearer on a dollar per head basis, but weights were also up a little.

Plainer condition light weight sheep sold cheaper in the very mixed quality penning and the s and firm on the well finished medium and heavy weights. Higher skin prices also contributed to a lift in some prices.

The NLRS said lamb quality remained mixed and the few better quality slaughter lambs had been supplemented on grain. The usual buyers operated in a much dearer market compared to a fortnight ago, with carcase rates matching the strong results of more recent sales held since the rain.

The handful of export lamb pens sold from $153-$175. The best pens of trade weight lambs, score 3 and 4, sold from $130-$148. On a carcase basis, these lead drafts of lambs sold from 540c/kg to nearly 600c/kg. The light weight lamb line-up was mostly plain and included some very small Merino lambs in very light condition, which sold to local agents.

Sheep were dearer in a yarding boosted by some bigger lines of Merino rams. Merino rams in full wool sold to $135. Most of the heavy Merino ewes made $90-$122, or about 365c/kg.

The NLRS said lamb numbers were boosted by big drafts of supplementary-fed lambs, including 1200 head from a Urana property in the Riverina. All the regular buyers attended.

The market was $2-$7 dearer, with bidding mostly seen across export and domestic lambs with decent fat cover. Buyers were more selective on plainer and small mixed lots of lambs which caused some quality related price fluctuations throughout the sale.

There was more weight and quality in the top end of the export lambs this week and prices reached $204 for an impressive draft of second-cross Poll Dorset sired lambs expected to dress at 38kg. The seconds made $196. After this the general run of heavy export lambs sold from $160-$172, with most sales at an estimated 500-530c/kg. The strongest demand was for well-finished lambs weighing 22-26kg cwt suiting domestic orders, with the pick of these making from $135-$155, or 550-570c/kg. The best of the trade weight supplementary-fed Merino lambs sold from $113-$137 at an estimated 530-540c/kg. Plainer lambs lacking finish mostly sold from $85-$120 depending on size, with some of the lighter lines holding firm week-on-week.

The sheep sold dearer, with restockers paying to $124 for woolly Merinos. Heavy crossbred ewes sold from $100-$110.

Quality was again very good, with some excellent, extra heavy lambs making to $212 with an estimated carcase weight of 40kg. Extra heavy lambs also sold to $210. Better covered trade weight lambs made $130-$156 and averaged around 560-570c/kg.

The mixed quality lamb yarding of crossbred and Merino lambs sold to very erratic bidding from the usual local and interstate trade and processor buyers. Feeders and restockers were subdued and operated mainly on the very light weight crossbreds and Merinos.

The NLRS said more trade and processor buyers were active, along with a small number of restocker orders. Quality lifted, with larger numbers of lambs with good weight and condition that lifted in price.

The NLRS said lamb quality was better than last week with more condition and weight. There were more prime lambs and also solid numbers of light and secondary lamb drafts for restockers and feeders. All buyers were present, but one lamb processor was on the sideline, along with live export orders.

Prices started lower, but returned to last week’s levels as the sale progressed. Light store lambs sold close to firm to restockers at $27-$66. The Merino ewe portion was dearer at $27-$62. Light lambs suitable for air freight processors and feed sold for $60-$93, close to $5 cheaper than last week. Trade weight lambs made $75-$111. Lighter conditioned drafts sold to feeders for close to 450c/g and processors bought the better drafts for 470-480c/kg, both back close to $4. Heavy lamb numbers increased and they sold firm at $106-$127.

Mutton supplies were also better than last week with solid numbers of heavy weight ewes. Ewe mutton prices averaged close to equal overall, but there was a lower start to the market. Light weight ewes made $30-$59 and the 2 score processor mutton sold from $54-$83, averaging close to 305c/kg cwt. Better conditioned and heavy weight ewes were $2 easier at $68-$97, or 295c/kg. Limited restocker purchases were made, with the ewe hoggets making $36-$65 and mature ewes $30-$75 and most marginally easier.

At the Powranna and Killafaddy saleyards on Tuesday the agents yarded 1000 lambs, 350 fewer than last week, and 660 sheep, 210 more.

The NLRS said there were fewer heavy pens. Most lamb prices were $2-$5 dearer and restockers were less prominent.

The sheep were mostly wethers and many were light weights with good length fleeces. The market was fully firm for the mixed quality yarding. Light sheep made $60-$78, medium weights and heavy $80-$89.