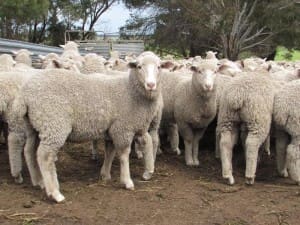 LAMB prices generally improved in saleyards mid-week with reduced yardings and many producers able to withhold lambs for rates to firm.

After Thursday’s saleyard sale, the National Livestock Reporting Service’s Eastern States Daily Indicators for the lamb categories were mostly improved, except for light lambs which lost 3 cents to close on 487c/kg.

The restocker lamb ESDI showed the most movement after the release of Thomas Foods International forward price contract into January 2016, lifting 7 cents to 568c/kg. The trade lamb ESDI firmed 2 cents to 514c/kg and the heavy lamb indicator lifted 1 cents to 508c/kg. The Merino lamb ESDI rose 4 cents to 440c/kg.

The ESDI for mutton closed down 2 cents to 343c/kg and the national indice was 1 cent lower, on 342c/kg.

NSW lamb producers have pasture feed “on their side”

The Wagga lamb market was anywhere from $5 to $10 better in patches and “everyone was happy”, he said.

Mr Mackay said NSW lamb producers were generally able to hold lambs back for better rates if necessary. Processors might have to offer more than the current saleyard price to get lambs, he said.

“We’ve got feed on our side, they’ve forgotten that; its spring and everything is just really good here at the moment.

“Lambs have actually put on a lot of weight here in the last two weeks, so I reckon it is going to come to bite them a little bit.”

But he said at prices “anywhere above mid-500c/kg, we’re in action.”

“600c/kg is the magical mark, the icing on the cake, but historically anything above 500c/kg is bloody good.

“So at the end of the day, if you can sell suckers and get $10 bucks for them, take it I reckon; before you shear, feed and drag them through a hot summer,” Mr Mackay said.

“It’s not too bad, it is just we’ve been a bit spoilt, that’s the trouble.”

Mr Mackay said a few processors are starting to put out forward prices now. TFI’s contract for 16-34kg cwt fat score 2-5 lambs for delivery to its Murray Bridge and Lobethal plants from November 2 2015 to January 29 2016 opened on September 23 and will close at 10am Monday, September 28.

The NLRS said about 1700 new season lambs were offered. Quality was good, with a good percentage of the lambs light and light trade weights. There was a small run of trade weight lambs, but a limited offering of heavy new season lambs. Old lambs were very mixed. All the usual buyers attended, but not all operated.

At the Central Tablelands Livestock Exchange at Carcoar on Wednesday, the agents yarded 3300 lambs, 500 more than last week, and 1700 sheep, 100 fewer.

The NLRS said lamb numbers decreased due to the Henty field days. Most were excellent quality new season lambs. A smaller group of buyers attended and not all export buyers operated. New season trade lambs were well-supplied and competition increased over all trade weight categories.

The NLRS said the lambs were mostly new season drafts. Quality was average to good considering the tough feed conditions in the supply region. Most of the regular buyers operated in a market which was dearer on the better covered trade weight and heavy lambs by $2-$6.

Trade weight and heavy lambs were in reasonable numbers and reached $148. Restockers sourced lambs for $80-$102 and from $54-$77 for lighter lots. They went to Ballarat, Mallee and south east South Australian buyers at improved levels on last week. Old lamb numbers declined and the few heavier drafts made $95-$115.

Sheep quality was average to good, with all weights and grades offered. Restockers paid from $44-$67 for light Merino ewes and to $113.50 for young crossbred ewes.

The NLRS said the quality of the old lambs, mainly tail-end drafts, was mixed. Fewer processors attended the cheaper sale.

Prices for lambs of all weights and grades were firm to $5 cheaper. Sheep sold $5-$8 easier.

In Western Australia at the Katanning saleyards on Wednesday, the agents yarded 5000 lambs, 1000 fewer than last week, and 7385 sheep, 529 less.

Young store wethers and ewes dominated the yarding and met strong competition from restockers. Young Merino ewes sold to restockers for $35-$55 and store wethers made $20-$87.

In Queensland at the Warwick saleyards on Wednesday, the Warwick Selling Agents yarded 1557 lambs and hoggets, and 444 sheep.

The lamb market was quoted firm, with lighter lambs a shade dearer. The mutton market was cheaper. The top-priced lambs estimated to weight 70kg lwt made $142.50 for the Glenshaw Partnership of Tara.