Lamb prices firm as heavy weights run out in saleyards 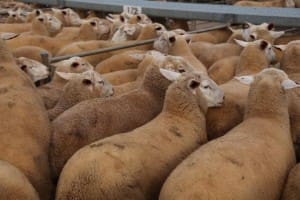 Quality heavy export lambs with finish continued to sell over $200 in the few saleyard sales held on Friday, reaching $213 at Griffith.

Rawlinson and Brown client, Ashley Douglas from Kikoira, 125 km north-east of Griffith, sold the top priced lambs on Friday; a draft of 74 late June-drop White Suffolk lambs with an estimated carcase weight of 42kg and a skin value of $4-$5. The second top price in the sale were Palmyra Investments’ $208.60 lambs, estimated 38kg cwt, with a $5-$6 skin.

Rawlinson and Brown agent Callum Stewart said most producers were winding up their lamb marketing with most drafts starting to show some dryness. The first new season suckers are expected late July, with the main run starting in mid-August.

Mr Douglas also topped the sale the previous week with some 44kg cwt lambs that made $215. He has had to finish lambs from his self-replacing White Suffolk flock on oats and hay this year after a very difficult past 18 months. About 25 mm of rain seven weeks ago enabled him to sow some early oats. Another 13mm of rain recently saved that crop and enabled him to continue sowing.

“Another 3-4 weeks without rain and it would have been getting a bit late.”

He is now looking more worried about spring rain than more in winter.

The National Livestock Reporting Service quoted most lamb and mutton indicators as firm to slightly improved after Friday’s saleyard sales.

The ESDI for mutton and the national mutton indicator closed up two cents on 374c/kg. 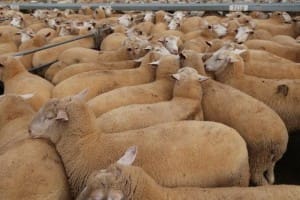 These lambs topped the Griffith market two weeks ago at $215.

The NLRS said the extra heavy weight lambs were of very good quality. Trade lambs were also well presented and mainly heavy and trade weights were penned. Store lambs were limited in supply. Most buyers operated in a generally firm market, except in the case of the heavy grades, which sold to a dearer trend.

The NLRS said the overall plainer quality yarding that was offered to a similar small field of buyers. One less and one additional buyer operated in a market that sold at mainly unchanged prices.