Lamb prices fall, but indicators hold above 610c/kg for trade and heavy lines 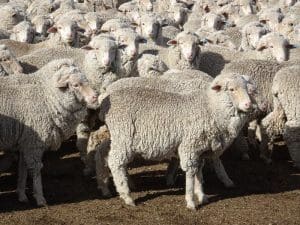 At Cowra trade weight lambs were $3 cheaper and the yarding’s lighter runs of heavy and extra lambs lost $10. At Griffith the trade lambs were $4-$7 easier, but heavy and extra heavy lines were firm to $4 dearer to be a similar cwt price to Cowra, around 616-641c/kg.

After Friday’s saleyard sales, the National Livestock Reporting Service’s Eastern States Daily Indicators for all the lamb categories were lower except Merinos, which gained 1 cent for the day to 585c/kg, but was 7 cents down for the week.

The indicator losses in all the lamb categories except the Merinos ranged from 24-38c/kg for the week, reflecting the waning quality and interest from buyers. The other lamb ESDIs, their daily and weekly changes were: restocker 576c/kg, down 1 cent daily, down 27c for the week; light 575c/kg, down 4c, down 34c; trade 613c/kg, down 5c, down 31c; heavy 632c/kg, down 4c, down 24c.

The ESDI for mutton fell 3 cents to 374c/kg on Friday, capping off a 38-cent loss for the week, and the national mutton indice was 4 cents lower on 373c/kg.

Young Merino ewes averaged $147 and sold to $221 for 180 21-23 month-old mid-March shorn Charinga blood ewes from Wedderburn in Victoria. The 62.4kg lwt were mostly score 3 and scanned 100 percent in lamb to Poll Dorset and White Suffolk rams.

Lambs dominated the first cross ewe category last week, selling from $101-$214. The top-priced lambs, a line of 150 May-June drop unshorn lambs at Calivil, Victoria, weighed 52.3kg lwt, were mostly score 3, and scanned in lamb 100pc to White Suffolk rams. A line of 378 mid-November shorn three year-old first cross ewes at Ararat in Victoria made $193. These ewes were scanned 139pc in lambs to Poll Dorset and composite sires, and weighed 63.8kg lwt and were mostly score 2.

Other notable ewe lines included $160 for 290 five year-old mid-August shorn Samm ewes at Wagga that were scanned in lamb 100pc to Poll Dorset rams. They weighed 62.6kg lwt and were mostly score 3.

The NLRS said with considerable rain around the district, numbers fell and quality was good in the handy run of extra heavy and well-finished heavy lambs. The trade and lighter grade lambs tended to be of mixed quality. There was only a limited number of store lambs.

All the usual buyers operated, except one. Competition was sound resulting in a cheaper trend for the trade lambs and firm to slightly dearer for the heavy weights.

The NLRS said lamb quality was very mixed, with some good lines of supplementary-fed lambs and the plainer types. A larger percentage of Merino lambs was penned. Most of the usual buyers competed in a cheaper market.