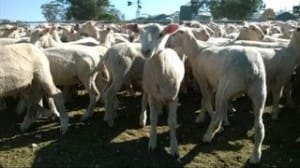 These 15.2kg cwt White Suffolk-1st cross lambs from Mundulla, SA, sold for $90 on AuctionsPlus on Tuesday.

Eastern state agents were still buying to fill lamb contract commitments for later in the year and early-2015, but supermarket and exporter demand restricted to topping up of over-the-hook purchases meant heavy, old and secondary lamb prices were hit the hardest in some yards.

The overall national result was falls in the main indicators, with the National Livestock Reporting Service quoting the Eastern States Trade Lamb Indicator at 460 c/kg cwt after Tuesday’s sales, down five cents, with a similar drop for heavy lambs to 454c/kg cwt. The ES mutton indicator finished at 284c/kg cwt, down five cents.

The national indicators also fell for the trade and heavy lambs, and for mutton, with only the light, restocker and Merino lamb levels holding firm or lifting. The national lamb indicators after Tuesday were: restocker 472c/kg cwt, up 4 cents; Merinos 383c/kg, no change; light 427c/kg, up 3c; trade 459c/kg, down 3c; heavy 452c/kg, down 6c. The mutton indicator lost five cents to end at 281c/kg cwt.

Over the hook rates fell across the country for sheep, and for lambs at some works in NSW and WA, but were unchanged elsewhere.

The NLRS said quality was mixed, with a good selection of trade and heavy weight lambs, along with a good percentage of lighter weights and Merinos. Hoggets were also well supplied.

The NLRS said young lambs were well-supplied and there was a fair selection of mixed quality old lambs. All regular buyers operated. Overall market trends for lambs were firm to cheaper.

With the increasing supply of young lambs available, old lambs lost favour with buyers to sell to a cheaper trend of $2-$8. The secondary quality old lambs were the most affected.

There was a good supply of well finished medium and heavy sheep penned, with both ewes and wethers represented. The market trend was dearer, with price improvements reflecting the improved quality.

The NLRS said there were 12,100 new season lambs penned and quality continued to be very mixed. Some good lines of well-finished lambs were offered along with the plainer drier types. Most of the usual buyers competed, along with restockers, in a cheaper market.

Mutton quality was mixed, with some good lines of medium and heavy sheep offered along with the plain light lines. Prices slipped $8-$10 and more in places. Merino ewes ranged from $60-$93. Crossbreds made $58-$80 and Merino wethers sold from $70-$89.

In Victoria on Monday at the Bendigo saleyards, agents yarded 24,114 lambs, 2391 more than last week.

The NLRS said it was the saleyards’ biggest lamb offering this spring. Quality was mixed, with the bulk of the young lambs now presenting with dry skins. All the regular processing orders were in place, however buyers didn’t appear under pressure for numbers and bidding was fairly subdued. The market was cheaper, with heavier slaughter lambs most affected and averaging $8 less than last week. Competition was more robust for the quality trade weight lambs and these eased by $3-$5. Prices for store lambs fluctuated, with early sales similar to last week, before competition eased later in the auction for a cheaper result overall. The market reached a top of $136 for a pen of young lambs estimated to weigh about 30kg, and it was one of only four sales of export lambs above $130. Sales over $120 were also fairly limited.

There was solid competition for store lambs from Ballarat, Gippsland, Bendigo, Birchip, Wycheproof and Warracknabeal. Most sales of lambs returning to the paddock ranged from $70-$97, with Ballarat agents occasionally paying up to $108 for heavier types. While the price range for store lambs was similar to last week, agents were generally buying more weight for their money, which meant prices did work out cheaper. Processors mainly paid from $70-$90 for light weight lambs to slaughter. The bulk of the young lambs suitable for slaughter were trade weights ranging from 20-24kg cwt, and most pens sold from $96-$118. While some of the top drafts of well-bred and finished lambs still made up to 480c/kg cwt, the general run was estimated at 440c/kg-460c/kg cwt. Heavy lambs weighing over 24kg were in limited supply, with about a dozen pens making over $120, to a top of $136, to average between 440c/kg-450c/kg cwt.

The supply of old season lamb was very mixed, and this section of the market was also cheaper.

Lambs $3 down at Ballarat

The NLRS said young lambs were well-supplied and there was a fair selection of mixed quality old lambs. All regular orders operated. Overall market trends through the lambs were firm to cheaper.

With the increasing supply of young lambs available, old lambs lost favour with buyers to sell to a cheaper trend of $2-$8. The secondary quality old lambs were the most affected.

There was a good supply of well-finished medium and heavy sheep penned, with both ewes and wethers represented. The market trend was dearer, with price improvements reflecting the improved quality.

Lamb restockers pay up to $105 at Naracoorte

The NLRS said there was a broader range in the quality of the sheep and lambs as the countryside starts to dry off. Producers offered more lambs and a few less sheep to a near-regular field of processors and some very active restockers. Most of the penning was lambs of weights suited to restockers. Light restocking lambs were unchanged to $5 dearer, with most $2-$3 higher. This put pressure on processors chasing light weight lambs and caused them to pay $5-$8 more. The light trade weight lambs sold $3 better but medium to heavy trade weights, not sought by restockers, were $2-$3 easier. Heavy export lambs remained unchanged. The sheep sold equal at best, with most up to $5 cheaper and the better covered heavy weights were $5-$10 lower.

Very few light weight sheep were penned and they ranged from $11 for the very poor 1 scores up to $41 for the better covered 2 scores. Medium weight 2 and 3 score sheep sold to the best enquiry and made from $40-$62, while the heavy to extra heavy 3 to 5 scores were further discounted to $50-$66. Most ewe sheep in 2 to 4 score condition were in a range of 180c/kg-245c/kg cwt. A pen of restocking ewes topped the sale at $72 and some Merino wethers also sold to a processor for the same price. Rams were $12 lower at $12-$26 due to one dominant ram buyer not attending the sale.

The very mixed quality yarding of crossbred and Merino lambs sold to easing competition from the usual trade and processor buyers, including a new Victorian operator concentrating on light and light trade weight lambs.

Restockers and feeders were active and the easing prices allowed feeders to buy heavier lambs to feed on. Feeder buyers bought light weight 2 score crossbreds for $44-$83, although the majority of the lambs purchased to feed on were 3 scores and sold from $76-$86.

The generally good quality yarding of sheep sold to the usual processors at easing prices. Restockers were occasionally active and paid $59 for ewes and $63-$69 for wethers. The 2 score ewes were scarce and demand was strong, and they lifted $3, selling from $52-$68 and averaging 240c/kg cwt. Heavy weight 3 score ewes were plentiful and demand was again easier, with prices from $50-$69 to averaged 195c/kg cwt. Despite wethers being scarce prices eased substantially, selling from $55-$64 and averaging 203c/kg cwt, and heavyweight rams sold from $24-$50.

The NLRS said the quality of the yarding improved with ewe weight and wool length increasing, and a slight decrease in very light lamb numbers. Prime trade lamb numbers remained limited but there were some pens of heavy lambs. Prices were stronger across the categories with lambs up around $3 and ewes were also slightly dearer. Lack of live export activity had little impact on ram and wether prices.

Ewe prices increased close to $3 for most. Light and plain drafts made $40-$45, while 2 scores suitable to processor orders sold from $45-$75, averaging $62, to be $3 dearer. Better conditioned and heavy weight ewes made $63-$99, similar to last week, with a close to 270c/kg cwt average. Restocker interest lifted with ewe hogget sales $2 dearer, with suitable mature ewes making $60-$96, up to $10 dearer, largely due to wool length.

Wether sales were firm despite the absence of live export orders. Light wethers made $50-$66 to restockers. Heavy wethers sold to processors and feeders at prices from $77-$103, while lighter and store sales made from $60-$76, close to equal on last week. Rams were again firm, with ram lambs selling to a top of $95 and better young drafts from $40-$65. Old rams to processors made $10-$40.