Lamb prices trend down, but quality trade lines selling well in the south 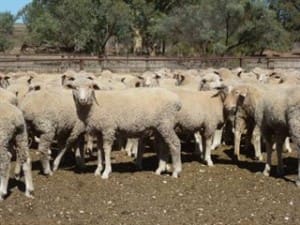 These 19.7kg cwt White Suffolk cross lambs at Orroroo in SA sold for $112 on AuctionsPlus this week.

Most lamb category prices were quoted as lower across eastern states saleyards by the National Livestock Reporting Service mid-week.

But well-finished southern trade and export lambs continue to make up to 580-600c/kg cwt, equal or slightly above domestic and export grid rates, though these rates were not quoted in NSW or SA centres.

And restockers continue to push exporters and trade buyers on lighter lambs in some centres.

Agents in most saleyards continue to be told by buyers that there is overseas market resistance at the peak export rates of recent months, though the MLA reported February lamb export shipments were the highest on record.

Buyers are also quoting skin values of $5-$7 in saleyards, which would diminish c/kg cwt return estimates, while many producers have not been able to realise these rates with over-the-hook consignments.

“I don’t think there is a price anomaly, we haven’t seen it – our lamb market the last two weeks has been sitting around 580-600c/kg,” he said.

“If you wanted to come into the market here last two weeks and buy a really good run of 22kg cwt smart good quality Downsy proper-finished trade lambs you needed to have $130-$135 – whatever that works out at with a $2 skin.”

Mr Pertzel said district lambs on feed or crops are not yet getting too heavy for domestic grid weight ranges, with most finished lambs coming in the saleyard weighing from 18-24kg cwt. About a third are store and very light lambs averaging 14-15kg and making up to 700c/kg. Very few lines are coming into Hamilton weighing over 25kg, he said.

“We are just selling them as they are ready if they are coming off green feed.

“If they are coming off pellets or feeders, there comes a point where input costs have to be factored in too,” he said.

But he believed lamb weight gains are not beating lot feeders or producers with crops in south-west Victoria.

“I reckon we sold down a lot of lambs early in the piece, including the suckers.

“I don’t think there is anywhere near the (number of) lambs in the paddock as what people think around here, because of the number of lambs we sold here in November.”

He believed over trade lamb saleyard rates over the past two weeks at Hamilton, at 560-600c/kg, were running ahead of the current domestic and export spot and forward rates of 540-580c/kg.

“It has got hot and dry again in the Riverina, and while ever there is no Lucerne in Wagga, the job’s always pretty tough.”

Producers are being forced to turn lambs off because of the seasonal conditions, enabling buyers to be selective in saleyards.

“Whilst ever they don’t have to drag feeders around they will leave them there,” he said.

“When it is creeping up $5 dearer every week, you can’t convince anyone to sell and the minute it is $5 cheaper, they are 25-deep trying to sell them.

“This is just a typical cycle that happens and I would say that it is seasonally driven.”

Wagga agents offered a tremendous run of quality lambs this week, he said.

Some regional producers with lambs on feed or crops are also having to sell to ensure consignments fall inside domestic and export grid weight ranges. March-April in the Riverina can also be a difficult period, often without an autumn break, Mr Cabot said.

After Thursday’s saleyard sales, the National Livestock Reporting Service quoted all but the Eastern States Daily Indicator for light lambs as lower. The lamb ESDIs are: restocker, 552c/kg, down 1 cent; Merino, 487c/kg, down 5c; light, 531c/kg, up 3c; trade, 533c/kg, down 4c; heavy, 532c/kg, down 5c. The national trade lamb indicator closed on Thursday at 534c/kg, down 3 cents, and the heavy lamb indice was at 533c/kg, down 5 cents.

The ES and national mutton indicators were both down six cents at 366c/kg cwt.

The NLRS said it was a pretty good quality yarding of lambs, with good numbers of heavy weights, limited numbers of ideal trade weights and a fair percentage of light weights.

It was a plainer quality yarding of mutton, with more light weight ewes than previous sales. Merino ewes were firm to $4 dearer while the crossbred ewes were $2 dearer. Limited numbers of Merino wethers were a little cheaper. The 3 and 4 score ewes sold from $66-$105 for Merinos and $115 for crossbreds. The 3 and 4 score Merino wethers sold from $68-$125.

At the Goulburn saleyards on Wednesday, the agents yarded 1800 lambs, and 1600 sheep, 200 fewer than last week.

The NLRS said there was a significant percentage of longer wool young lambs and most had fair weight, but lacked in quality. The old lamb section included some well-finished heavy weights and a handy run of Dorpers.

With a couple of regular buyers absent, the market eased around $2-$5 although quality was a factor as the season begins to dry off. A limited number of restocker lambs made $76-$90, while trade weight young lambs ranged from $101-$111. Heavy weights reached $123. In the old lambs section, trade weights made $88-$110, while heavy and extra heavy weights made $108-$132. There was little distinction in carcase prices for young or old lambs and buyers preferred the better finished lines. Most averaged 460c/kg-500c/kg cwt.

A smaller but good quality run of mutton included some good runs of heavy ewes and wethers. Demand was a little stronger on the better yielding sheep and prices averaged $5-$8 dearer. Light 2 score ewes made $58-$63, while medium and heavy weights ranged from $63-$100. Medium and heavy Merino wethers ranged from $88-$113 for most mutton to average 300c/kg-360c/kg cwt.

Most trade lambs sold to weaker demand across all weight ranges. The majority of trade lambs were $2 cheaper, with heavy trade lambs averaging 530c/kg cwt and reaching a top price of $138. Trade lambs, 20-22kg cwt, were in reasonable supply, with the better well-finished pens selling to stronger competition and making $120-$131.

There were limited numbers of trade Merino lambs and demand weakened for the well finished pens, resulting in a cheaper trend of up to $12. Medium and heavy Merino trade lambs made from $103-$120. Well-bred secondary lambs returning to the paddock were in limited numbers and sold from $89-$104, while lambs to feed-on reached a top price of $112.

Heavy export lambs were well-supplied, with some buyers not operating fully, while other export processors were very selective. Heavy lambs made from $135-$150 to average 518c/kg cwt. A fair percentage of heavy lambs were showing dryness, with the bulk of the extra heavy lambs selling from $139-$182 and averaging 493c/kg-501c/kg cwt.

Mutton quality was quite mixed, with all weights and grades represented. Merino ewes suitable for the trade were well-supplied and prices were unchanged to $2 higher, ranging from 344c/kg-373c/kg cwt. Heavy ewes sold to strong demand with buyers keen to secure longer-wool Merino ewes. Heavy sheep sold $4 dearer, making from $86-$132.20. Merino wethers were in greater numbers and prices lifted up to $15 for the heavy portion to average 394c/kg cwt. A single pen of wethers in full wool reached a top price of $132.

In Victoria at the Hamilton saleyards on Wednesday, the agents yarded 16,851 lambs, 2655 more than last week.

The NLRS said an excellent yarding of heavy to good quality trade weight lambs was offered to a full complement of buyers.

Fewer light weight lambs were supplied and they were keenly sought by restockers operating through Ballarat and SA agents, forcing prices up $5-$7. Bidding remained constant for the light trade lambs as they were up to $5 dearer, with the medium trade weights unchanged. But the heavier trade weights $3-$5 cheaper overall.

The NLRS said lamb quality was good with well-presented trade weight and heavy lambs in good numbers. The usual buyers operated in cheaper market, with most lambs selling from $2-$8 easier on last week. The better presented lighter trade weight lambs were close to unchanged.

In the Hamilton saleyards on Thursday, the agents yarded 8816 sheep, 880 fewer than last week.

The NLRS said all the regular buyers other than one heavier mutton export buyer operated on the plainer offering, made up of more lighter weight sheep compared to previous sales. Restockers took the opportunity to purchase some young Merino sheep as the sale fluctuated to be weaker early, but regained some ground at the end of the market.

The NLRS said the usual trade and processor buyers were present as well as a number of restocker orders. Prices tended to be slightly easier across the lamb section of the market.

The NLRS said quality was plain throughout, with only moderate numbers of heavy ewes and prime lamb drafts. Store and light weight lambs were well-supplied.

Competition remained solid from a full field of buyers and due to the lack of numbers of better types, the market was stronger, with prime trade lamb prices lifting $3-$5. The better store lambs also lifted while wether drafts remained firm.

Wether prices were solid driven by live export and processor demand. Better export wethers sold from $70-$100 to remain firm along with store drafts, which made $60-$81. Rams again sold to solid competition, with ram lambs making $70-$90 and young drafts to live export and feeders $30-$57. Old rams made $25-$53 to processors.