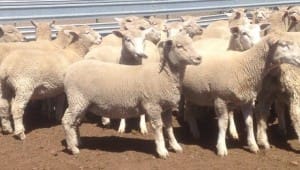 More lambs are being offered with dry skins and with fewer quality trade weights being offered, domestic buyers are pushing into heavy lambs.

In Victoria at Bendigo and Ballarat, trade and heavy lambs sold firm to slightly dearer on quality and keen restocker and processor competition on light lambs lifted rates $7 at Bendigo.

Despite firm to dearer prices in some saleyards, the dominance of secondary lambs contributed to a general fall in the NLRS Eastern States Daily Indicators for lamb early this week. The light and trade lamb indicators lost 13c/kg in the first two days selling this week and heavy weights dropped 7c/kg.

The ESDI and national mutton indicators finished down 6 cents on 291c/kg after Tuesday’s sales.

In New South Wales, the NLRS quoted OTH lamb rates as continuing to fall, as hot and dry conditions grip the state and impacted on quality and supply. Mutton rates have also eased, but not to the same degree as lambs.

The NLRS said the mixed yarding of lambs had the usual runs of heavy weights and the odd pen of neat trade weights. Merino lambs and white Dorpers also made up a fair percentage of the yarding.

The fair quality yarding of sheep had some good pens of heavy weights and a fair selection of plainer types. Light and medium weight sheep sold firm and the heavier weight ewes were up to $10 cheaper. The 2 score ewes sold from $35-$68. The better 3 and 4 score crossbreds made $50-$102 and Merinos made up to $99. Prime Merino wethers sold from $92-$106.

The NLRS said it was one of the largest pennings for some time, brought on by seasonal conditions deteriorating by the day. Lamb quality was mostly good, though there was a vast range in weight and finish. The regular processing orders were in place, but there was next to no restocker demand for store lambs. There were cheaper trends throughout, with the restocker young lambs most affected.

Trade weight lambs averaged $3-$6 cheaper. Heavy weight old lambs averaged $5-$9 cheaper, with some of those prices affected by quality. There were large numbers of lambs showing signs of dryness due to a lack of fresh green feed.

A large percentage of the sheep offering were light weight ewes. Light weight sheep sold to a slightly cheaper trend. Restocker bid on a large line of light weight CFA Merino ewes at prices well below those when the season was better. The lack of supply of well-finished medium and heavy sheep was evident with those classes selling firm to slightly dearer.

The NLRS said lamb quality was very mixed, with some good lines of well-finished lambs, though a large percentage of the yarding showed the effects of the continuing dry spell. Most of the usual buyers competed in a cheaper market.

Quality was a factor in prices, with the best slaughter lambs similar to last week, but plainer and drier types averaging $2-$3 easier. Light lambs sold well in comparison, with the main runs of store lambs in the 12-16kg category averaging $7 dearer. The market reached a top of $167 for heavy export lambs. There was only about a dozen pens of heavy export lambs over 28kg which sold from $153 up to $167 for a pen estimated at around 32kg cwt. These heavy lambs ranged from about 472-500c/kg depending on breed quality and finish.

Quality and weight tailed-off very quickly and the limited pens of heavy trade weight lambs sold from $122-$145 with the major domestic buyers pushing into more weight again this week to access better carcase finish. However, the majority of the trade weight lambs were plainer types showing dryness which sold from $100-$120. On a carcase basis, the best crossbred trade lambs made around 530c, but price averages across the yarding were generally 485-510c/kg.

Light lambs were well supported by restockers and processors, with most sales from $80-$96. The best trade weight Merino lambs in a big skin sold to $133, with plainer and lighter types making $86-$113.

The better yarding of sheep had more lines of Merino wethers and ewes. Like recent sales, not all the major exporters operated. Prices over most mutton categories showed a weaker trend of $2-$5. Heavy crossbred ewes sold from $76-$96. The best Merino wethers sold to $98.60 and ewes to $85. The better quality mutton was estimated at 280-310c/kg cwt.

At the South Australian Livestock Exchange at Dublin on Tuesday, the agents yarded 9116 lambs, 3192 fewer than last week, and 1802 sheep, 220 more.

The NLRS said the generally good quality yarding of crossbred and Merino lambs sold to stronger trade and processor bidding. The prices attained during the early sales were far in excess of those generated in the latter sales and returns for supplementary fed, heavy weight crossbreds provided a stark contrast. Feeders and restockers were active, particularly on heavier type crossbred lambs. Crossbred lambs to feed on sold from $78-$108 and light weight 3 score crossbreds sold to trade buyers lifted $2 to $100-$108. Light trade weight 4 scores sold from $106-$115, averaging 466c/kg cwt, while heavy trade weights lifted $3 to $112-$140, averaging 498c/kg. Heavy weights lifted $10 to $130-$174 and returned 524-532c/kg.

The NLRS said the reduced offering sold to a small field of trade and processor buyers, and restockers.

The NLRS said prices remained firm for a mixed quality yarding of sheep and lambs.