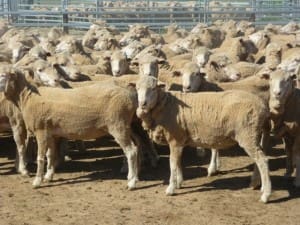 Lamb rates finished on a positive trend last week as buyers continued to be keen to purchase quality trade and domestic-type supplies from saleyards.

Mutton rates remained firm as numbers continued to go down.

AuctionsPlus said sheep and lamb numbers declined by 6000 to 31,115 head, with a slight improvement in Merino ewe prices and other categories remaining steady on last week.

Unjoined Merino ewe hoggets sold from $47.50 to $140, with only one sale under $100. The top price was for well-grown Poll Collinsville blood Raheen Ag ewes a month off-shears at Hay in the Riverina Biosecurity Area. The 275 ewes offered by Elders were sold due to the season running out prior to the company’s big store sale on September 19, when 60,000 sheep are booked. The 14-16 month-old 60kg ewes were ready to join.

The NLRS said there were 3000 good quality new season lambs, while the old lambs and mutton remained small and mixed. Demand for young lambs was keen from several domestic buyers and prices averaged $5 dearer than last week.

Plain quality and small numbers were limiting factors in regards to demand and prices for old lambs and mutton, the NLRS said.

Old lambs were very mixed for quality as the tail-end drafts come through the system. Prices reached a top of $135 for a pen of heavy export lambs, but there were only limited sales over $100. Most of the old lambs were plainer and lighter types that sold from $52-$88. The best quality old lambs sold at about 450c/kg-470c/kg cwt.

Prices were generally firm for mutton, ranging from $52-$98 for good trade weight Merino ewes with a reasonable skin. The mutton sold at about 300c/kg cwt.