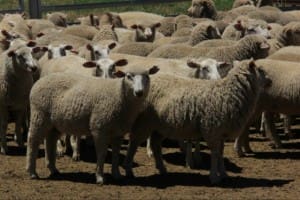 Grid rates for lambs lifted this week as saleyard prices rose in a predictable pre-Christmas rush for fresh quality trade and heavy lambs by domestic and export processors.

But seasonal conditions – rainfall and stock water on properties – and the viability of restockers feedlotting or stubble-finishing lambs are looming as the big issues set to affect quality lamb supplies in early 2015.

This week’s first two days of saleyard sales, the last for the year, also reflected the ongoing strong domestic and export demand for lamb, with the National Livestock Reporting Service’s eastern daily and national indicators increasing for all lamb categories except Merinos.

Sourcing quality to be a problem in 2015

Elders Bendigo agent Greg Harrington said although some of his clients specialised in having lambs finished between Christmas and New Year for processors, sourcing quality supplies would become more of a problem in the New Year.

“It is quality they are chasing and that is going to be the next hardest problem we are coming up against.

“Once we get rid of the shorn lambs there is going to be a gap in the quality, for sure,” he said.

“A lot of these lambs have come off the back of pretty good rains in some areas.

“North of Bendigo some of the lucerne-growing areas have had up to three inches of rain,” he said.

“Once that is over and gone it will be back to feeding lambs and who has got the feed to feed them.”

Mr Harrington said stock water is going to be a major problem north of Bendigo in an area from St Arnaud to Bendigo, from the Loddon Valley Highway probably right through to Kerang.

“It is looming as one of the bigger problems we’ve got for their breeding ewes and for anybody trying to fatten lambs.

“We’ve had another year of continuous rain of 5-10 millimetres, but no big rains to run water.”

Mr Harrington said the early contracts of around 520c/kg cwt for January-delivery lambs have been filled and the physical market has probably exceeded that in the last 10 days. Though he said it was debatable whether saleyard prices had run ahead of grid prices before then.

“I kill 90 percent of my lambs over the hooks and most of the blokes who have hooked lambs over a period of time, don’t look at the high prices, they look at their average over the 12-month period.

“My experience for the last five years, over a 12-month period, my hook lamb prices would be more consistent than the saleyards, by a considerable margin; I would say every bit of 20 cents, maybe up to 30 cents a kilogram (cwt),” he said.

“You get paid for what you’ve got if you hook them and you can take them to market and pick up $10-$15 this week and next week you can drop $20.

“If you’ve got the right article you will get paid consistently (over the hook).”

The over-the-hook price came into its own on dry-skinned lambs that would be discounted in a saleyard, he said.

Mr Harrington believed supermarket contracts of around 530c/kg cwt had been filled.

“It will be a wait-and-see job for what comes out over the New Year.”

He had not heard of any contracts for lamb delivery after January 2015, but most of his feeder clients were lotfeeding lambs on a 40-day rotation, budgeting on prices of around 550c/kg cwt for slaughter lambs delivered in April-May.

“At the present moment, it is hard to buy a lamb in the range we need to, but I bought a lot of lambs early and a lot out of the paddock.”

Mallee lambs to come back in February-March

Mr Harrington said he had been told a lot of lambs had been put back out onto Mallee stubble and growth boosted by thunderstorms, to return for marketing in February-March. Though this will depend on rainfall affecting farmers’ crop spraying programs and whether they have grain on hand to feedlot lambs.

“The general consensus of opinion is that in February-March you might see a bit of a drop-off in the price because supply will be coming back.

“A lot of those lambs might not be fully finished so there might be opportunities for feeders to buy some lambs that are forward in condition but not quite good enough to kill.”

He believed the competition between restockers and processors for the 12-18kg dressed weight lamb would continue.

In NSW, the NLRS quoted over-the-hook prices for lamb as slightly higher this week, after a late week surge in saleyard prices last week. Mutton prices also lifted marginally from a couple of contributors.

In Victoria, the NLRS said over-the-hook lamb rates were dearer across all categories this week, with light, trade and heavy weight carcases reaching a top of 520c/kg cwt. The majority of contributors kept mutton rates unchanged. No trend is reported due to a major contributor not quoting this week, the NLRS said.

In Western Australia, the NLRS quoted rises in all the over-the-hook lamb categories and mutton rates as unchanged.

The NLRS said Dubbo’s last sale for the year produced a mixed yarding of lambs with some very good runs of heavy weights and only limited numbers of trade weights. There were also fair numbers of lighter weight lambs. A full field of buyers created a solid market.

The NLRS said the quality of the lambs was generally good with some very good quality trade and heavyweights penned. Demand was strong from the regular buyers, leading into a three-week break from sales. Market trends were dearer through all weight classes. Restockers were active on well-bred second cross lambs. however that activity fell away on secondary quality lots.

There was a much larger supply of heavy lambs with the best carrying more weight than the previous week. Market trends were also dearer, up to $10, with the extra weight adding to some price improvement.

Some well-finished ewes and wethers were offered. There was little change in the market for the better medium and heavy sheep. Plain condition and secondary quality ewes sold to a slightly cheaper trend. A single pen of wethers carrying full 12 months wool topped the market with restockers competing strongly with processors.

The NLRS said lamb quality continued to be fair, with good numbers of finished lambs. Most of the offering was heavy and extra heavy shorn lambs. The usual buyers competed in a dearer market.

The sheep were mainly of medium weight ewes and wethers, with several lots carrying a good skin. The market was again strong, with ewes selling to $85 and wethers to $100.

The NLRS said competition across all categories of lamb and mutton was strong in the last sale for the year. Most lamb sales were $3-$10 dearer, with well-presented young shorn lambs attracting the best competition. Bidding on longer wool young lambs was more selective amid reports carcase yields from the drier skinned lambs have declined. The supply of heavy export lambs was limited, and about a dozen pens of 28-30kg shorn lambs sold from $160-$171.20. The sheep sale was firm to dearer on last week’s improved prices. There was a charity pen of lambs donated to help the family of a young local girl battling cancer, and buyers showed some Christmas spirit by paying $360.

Bidding for light weight lambs was strong, fuelled by processors and restockers. The better bred and presented light 16-20kg lambs were a highlight of the sale and sold from $84-$118. Prices for several pens of light domestic Merino lambs also showed considerable price improvement.

The lead drafts of slaughter lambs generally sold from $125-$150 to exporters and the major domestic processors. There were only limited sales above $160 and the market peaked at $171.20. The majority of the quality shorn lambs were estimated at 540c/kg-580c/kg, slightly ahead of the young longer wool lambs at 530c/kg-560c/kg cwt.

The sheep yarding included several runs of extra heavy ewes, which benefited from strong export orders. Heavy Merino ewes in a big skin sold to $110, while the top pens of extra heavy first-cross ewes made $96-$110. The lead runs of Merino wethers sold from $100-$115. The general run of ewes sold from $65-$90. The quality kill sheep were estimated at 300c/kg-330c/kg cwt.

At Hamilton on Monday, the agents yarded 13,650 lambs, 6512 more than the previous Monday sale.

The NLRS said overall quality was not as good in Hamilton’s last Monday split sale for 2015, with less weight and condition in lambs that ranged from 14-26kg cwt. The better quality lines sold at the best prices. There was a slightly reduced field of buyers and also fewer restockers.

The NLRS said the usual buyers operated strongly in a dearer market, with most lambs selling $2-$7 dearer. Quality was good, although some lambs with longer skins were starting to show dryness. More shorn lambs were yarded again this week.

The NLRS said there was a full range of trade and processor buyers as well as a number of restockers.

The NLRS said the generally good quality yarding of crossbred and Merino lambs sold to weaker competition from the usual trade and processor buyers. Agents were very active on very light and light weight crossbreds at prices above last week’s high levels.

The NLRS said lamb quality was reasonable, but there was a lack of prime drafts with most in forward store condition and of lighter weight. Buyers were active across the yarding, attempting to secure adequate numbers with the next sale on the January 6.

Very light and store lambs, including Merino drafts, made $34-$65 to restockers. The better framed and conditioned light lamb drafts were purchased by feeders, live export and processors, were marginally dearer at $70-$94. Trade lambs sold from $92-$118, with most firm to $3 dearer and realising close to 510c/kg cwt. Heavier lambs made $110-$128.50.

The sheep included some good medium and heavy weights, but there were good numbers of light weight and light conditioned drafts. Heavy ewes sold marginally easier, but lighter conditioned and plain drafts were slightly dearer. Light weight ewes made $43-$56, with 2 score mutton to processors making $50-$75 to mostly finish $1-$3 easier. The 3 and 4 score ewes, including heavy weight drafts, made $62-$94 with most sales $1-$3 dearer. Young ewes to restockers made $41-$80 and remained close to firm.