Lamb demand intensifies as TFI goes to 480c/kg on grid 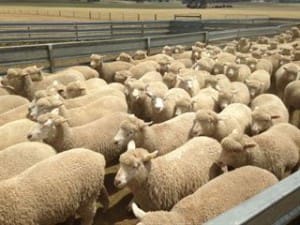 These 17.6kg cwt Poll Dorset-Lambpro cross lambs at Ararat sold for $84.50 on AuctionsPlus this week.

Quality lambs in saleyards are selling above grid prices and up to 500c/kg cwt for the best trade and heavy drafts at Victorian centres.

Processors are also competing strongly at most centres for heavy sheep, with little or none of the weight and fat discounts still being applied on over-the-hook grids.

TFI national sheep and lamb livestock manager Paul Leonard said the 20c/kg cwt lift in the top grid price for 16-34kg cwt crossbred lambs to 480c/kg cwt was made on Monday to ensure the company’s share of quality lambs. This is believed to be 10c/kg above the nearest competitor.

TFI’s Murray Bridge plant is closing for Christmas, with its last 2014 kill on December 18, recommencing on Monday January 5. All the company’s other facilities, Tamworth (NSW), Wallangarra (Qld) and Lobethal (SA) will kill through summer, other than the normal public holidays.

“We just want to stay out in front and get a good share of the quality lambs,” Mr Leonard said.

In NSW at the Dubbo saleyards on Monday, the agents yarded 10,475, 905 more than last week, and 10,155 sheep, 265 more. The NLRS said the yarding included fair numbers of trade and heavy weight lambs along with a good percentage of light weights. Properly-finished Merino lambs were in limited supply. All the regular buyers operated.

At the Tamworth saleyards on Monday, the agents yarded 1700 sheep, 280 more than last week, and 2870 sheep, 2150 more. The NLRS said lamb quality was fair to good, with an even split of young and old drafts. The usual buyers attended. Market trends through the lambs were generally cheaper, with odd sales firm. Trade weight lambs were $4-$6 cheaper. Heavy weight lambs remained firm with some quality related price change.

The big increase in sheep numbers included some large lines of medium weight shorn Merino ewes and wethers. The increased numbers eased pressure on buyers to secure requirements and resulted in cheaper trends. The increase also brought about some average quality variations and this was reflected in price changes.

At the Forbes saleyards on Tuesday, the agents yarded 13,500 lambs, 2850 more than last week, and 7000 sheep, 700 more. The NLRS said the yarding included 3000 new season lambs and quality continued to be very mixed. There were both well-finished and plainer lambs, along with the light store drafts. Most of the usual buyers competed in a market that was slightly dearer for the better lambs and held firm for the plainer secondary lines.

Mutton numbers were made up of mostly Merinos and quality was again mixed, with prices holding fairly steady. Merino ewes sold from $72-$97, while crossbred ewes ranged from $75-$95. Dorper ewes sold from $64-$82, while Merino wethers ranged in price from $85-$96.

As Bendigo’s regular combined sales re-commenced this week, the NLRS said quality in the lamb run was boosted by several drafts of young lambs from the southern grazing areas of Mansfield, Pyalong and Kilmore. These lines presented in fresh condition with good clean skins and received strong support from export and domestic buyers to average $2-$5 higher for most sales.

Bidding was more selective on the secondary lambs which lacked finish and were dry in the skin, with most of these plainer pens firm to slightly cheaper than a week ago. The market reached a top of $143.60 for young lambs estimated to have a carcase weight of about 29kg, and it was one of just two extra heavy pens to make over $140. Prices for light lambs did fluctuate based on breed quality and finish. Restockers from Finley, Echuca, Shepparton, Birchip and the local Bendigo area paid from $72-$88 for most store lambs, with some sales working-out a few dollars dearer. The plainer lambs to slaughter mostly made from $80-$96 to generally average a couple of dollars easier.

Bidding for quality slaughter lambs was solid from both exporters and the major domestic buyers. The best trade weight lambs sold from $105-$118, while the heavier types over about 24kg cwt benefited from both export and domestic competition. It resulted in bigger numbers selling above $120, with about 40 pens of young lambs making from $120-$135. Sales over $136 were limited to a few pens of extra heavy export lambs. Most of the quality slaughter lambs averaged an estimated 465c/kg-480c/kg cwt, with odd sales of well-presented trade weight lambs out to about 500c/kg.

The sheep sale included another good line-up of heavy crossbred and Merino sheep. Prices for heavy mutton were similar to the previous week, with extra heavy crossbred ewes selling from $80-$98 and averaging about $92. Heavy Merino ewes in a big skin sold to a top of $96 and wethers made to $96. The market showed a dearer trend for trade and lightweight Merino sheep. On a carcase basis the extra heavy crossbreds were estimated at about 268c/kg, while the quality Merino sheep averaged ranged from 290c/kg-320c/kg cwt.

The NLRS said quality over the trade and heavy lambs was good with many lambs showing more finish and this was reflected in the prices obtained. The better presented lambs sold $2-$4 up on last week. The usual buyers operated strongly, with a quality pen of heavy young lambs reaching $149.

The NLRS said lamb and sheep numbers fell, but overall prices remained firm to $3 dearer. The usual trade and processors were present, while the restockers were boosted by an extra buyer who bid freely on suitable lines.

The NLRS said the yarding of crossbred and Merino lambs sold to fluctuating competition from the usual trade and processor buyers. The quality of the yarding was the poorest seen for some months and the percentage of lambs suitable for slaughter was small.

Trade lambs back $8 at Muchea

The NLRS said the yarding included moderate numbers of trade and heavy lambs, but most were light weight and store drafts. Competition remained solid from a full field of processors and restockers, with selective live export competition on wether lambs. The prime lamb spike seen in recent weeks disappeared, with prices returning to normal levels. Mutton prices were close to firm with light store ewes very strong due to restocker demand.

Ewe prices were close to firm, with light weight ewes making $27-$63.50, supported by strong restocker demand. The 2 score processor mutton sold from $46-$76, to be firm to $1 cheaper, with the better 3 and 4 score ewes including heavy weight drafts making $60-$90, easing $3. Ewes to restockers were back $3 with better conditioned drafts making $55-$87. Wether prices eased slightly, with minimal live export activity. Heavy wethers made $77-$90, to be firm to $6 easier, with most going to processors. Store and light weight wethers sold from $52-$79 and were $1-$6 easier. Ram prices remained firm, with ram lambs making $70-$85 to processors, while other young ram drafts to export and feeders made $40-$57. Old rams to processors made from $5-$45.