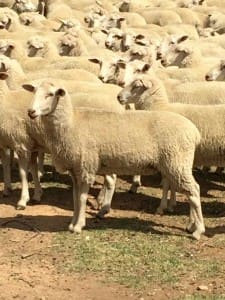 Most variations in prices for lambs and sheep seemed to be based on quality, but despite this the National Livestock Reporting Service quoted all lamb and mutton daily indicators as either firm or rising.

Apart from big movements in Merino lamb prices earlier in the week, the largest rises were for trade and heavy lambs late last week.

Griffith’s extra heavyweight lamb prices were the highlight of the week ranged from $154-$196, or 570c/kg-615c/kg cwt. Reflecting the lower numbers of heavy lambs available, after Friday’s sales, the NLRS quoted the ES and national daily indicators as up four cents to 569c/kg cwt. The ES heavy lamb indicator rose 17 cents last week.

The ES and national mutton indicators finished the week up one cent to 358c/kg cwt.

Store lamb prices continued to creep upward, while breeder prices appeared softer, she said. “There were a higher proportion of unjoined ewes on offer this week and the small number of scanned ewes achieved similar rates.”

The NLRS said lamb quality was again fair with good numbers of well-finished lambs available. Heavy and extra heavyweight lambs made up the majority of the yarding. The usual buyers and an extra domestic buyer competed in a dearer market.

The NLRS said lamb quality continued to be good, particularly for the heavy grades which were very well-finished. Mainly heavy lambs were penned along with a limited supply of trade weights. Store lambs were in reasonable numbers. All the usual buyers operated and competition was strong, resulting in a generally dearer market.

The NLRS said quality was fairly mixed and prices from the small field of processors and steady restocker competition reflected this. Not all processors operated fully, one not at all, with prices best for heavy weight lambs and sheep.