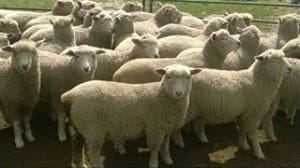 Lamb and mutton prices edged higher late last week as buyers competed for any quality lines in the saleyard offerings on Friday.

Most saleyards are reporting increasing numbers of dry and store lambs, while demand for heavy mutton is increasing.

The lamb offering reduced in most saleyards on Friday, except at Cowra, and sheep numbers increased, but AuctionsPlus said fewer sheep and lambs were offered online last week.

“While clearance rates remained on par with recent weeks, prices across most weight categories dropped $3-$5, and up to $10 for heavier lambs,” she said.

Ms Adams said heavy grown wethers attracted competition from restockers and processors and sold from $74-$83, with the top priced lot being three-year-old wethers out of Victoria weighing 53kg live with a March skin. Merino wether lambs sold from $42-$51 and numbers were well back on last week’s big offering.

Merino ewe prices have been steadily slipping for the past few weeks. A few sales recorded prices from $70-$117. Unjoined four and five-year-old ewes made $67-$90.

The NLRS said quality was good in the shorn new season lambs. The yarding comprised mainly trade and heavy weight lambs, but there more lighter lambs showing signs of dryness. Store lambs were in increased numbers. All the buyers were present except for one and competition was generally solid, resulting in a firm market for trade weights and dearer for the heavy grades.

The NLRS said lamb quality was very mixed, with some large runs of light store lambs offered along with the better-finished types. There were an increased number of shorn new season lambs offered. Most of the usual buyers competed in a firm to slightly dearer market.

Mutton numbers were made up of mostly Merino ewes and quality continues to be mixed. Prices lifted $3-$5 with Merino ewes selling from $77-$100. Dorper ewes ranged from $62-$83. Crossbred ewes averaged from $85.

The NLRS said quality and weights were mixed with even more lambs showing dryness. There were odd pens of better looking trade and heavy weight lambs and these sold to the best inquiry to be up to $5 higher. The average runs of lambs were fully equal to a little dearer. Restockers were only moderately active on light weight lambs and were restricted to local competition at firm to slightly easier prices. Sheep sold at levels mainly $5-$8 higher. Most of the yarding was ewes of medium to extra heavy weight.