Lamb and mutton prices pulled back in saleyards mid-week 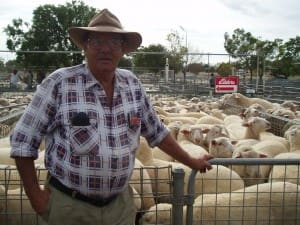 Lamb and mutton prices were pulled back in most saleyards across Australia mid-week as processor buyers sought to temper last week’s price lifts, especially for heavy lambs.

Agents reported that recent price rises brought more stock into saleyards and direct to processors, allowing processors to stand back on the rail at some centres, especially where quality dipped.

However, continued restocker interest kept pressure on exporters and reduce the price drops for light trade, trade and restocker lambs.

Horsham agents offered a good quality yarding of lambs on Wednesday but most still sold $5-$12 easier, consistent with most other centres.

Rodwells Horsham manager Wayne Driscoll said the access to lamb numbers had been greater in the past week.

“It will come again, it is just that no-one likes to see these peaks and troughs like that.

“It is too hard for everyone to operate.”

Last week the market was “over-heated” and “fired a shot of numbers and caused this kick back the other way,” he said.

“So we will have nothing much to sell this week, we will reduce numbers until things can settle.”

He said district producers were not forced to sell at the moment.

After Thursday’s sales, the National Livestock Reporting Service reported its Eastern States Daily Indicator for heavy lambs as down 14 cents to 551c/kg cwt and the trade lamb indice fell six cents to 543c/kg cwt. The other ESDIs were restocker lambs, down two cents to 548c/kg, Merinos down nine cents to 495 and light lambs down five cents to 532c/kg. The national heavy lamb indicator also fell 14 cents to 552c/kg and the trade indice was at 544c/kg, down seven cents.

The national and ES daily mutton indicators fell 10 cents to close at 350c/kg and 351c/kg.

The NLRS said the fair quality yarding had some excellent heavy weight lambs and a reasonable selection of trade weights. Not all the regular buyers operated in the tougher market.

The good quality yarding of mutton had good numbers of well-finished Merino ewes and wethers along with a good line up of crossbreds. Light and medium weight Merino ewes were $2-$3 dearer, while the heavier weight Merinos remained firm. Crossbred ewes were $3 cheaper.

The NLRS said well-finished lambs were scarce, with most lots showing dryness, in the mixed quality offering. Mainly light and trade weights were consigned and the plainer quality allowed restockers to operate across a range of weights.

It was generally fair to good quality sheep offering. Demand for mutton also weakened and prices were mostly $5-$10 cheaper. Light 2 score ewes made $28-$51, while medium and heavy weights mostly $45-$100. One small lot of extra heavy crossbred ewes reached $130. Heavy Merino wethers topped at $106 for most of the better covered mutton to average 280ccx/kg-350c/kg cwt.

The NLRS said lamb quality was fair with many showing the effects of the hot conditions. Trade lambs were in shorter supply, with more showing dryness in the skin. Heavy and extra lambs were well-supplied. However, export processor competition waned considerably. Plainer shorn lambs lacking finish were keenly sought by lot feeders, but prices were significantly cheaper. The usual domestic and export buyers competed in a cheaper market.

Heavy export lambs were well-supplied and once again there were plenty of lambs weighing above 30kg cwt. Heavy lambs made from $134-$151 to average 542c/kg cwt. The bulk of the extra heavy lambs sold from $144-$190, averaging 515c/kg cwt.

Mutton quality was quite mixed, with all weights and grades represented. Merino ewes suitable for the trade were well-supplied and prices eased $4-$5 to average 345c/kg cwt. Heavy ewe mutton sold to solid demand with most buyers keen to capture adequate supplies. Heavy sheep made from $86-$128 averaging 362c/kg-392c/kg cwt. Merino wethers were in limited numbers and processors paid from $84-$115.

In Victoria at the Hamilton saleyards, the agents yarded 12,346 lambs, 3554 fewer than last week.

The NLRS said the mixed quality lamb yarding comprised mostly tradeweights, with a good number of light lambs and only a few pens of heavy weights. The usual buyers were present, but three buyers did not operate fully and consequently there was less competition.

The NLRS said quality was good over the smaller yarding of trade and heavy weight lambs offered. The usual buyers attended but competition was not as strong as the high levels of previous weeks. Lambs generally sold $5-$12 easier on last week and more in places. Restockers were active and paid from $89.50-$126.50 for lambs, while the lighter lots sold from $35-$60. Heavy hoggets sold from $78-$115, and quality Merino lambs made $95-$131.

In the Hamilton saleyards on Thursday, the agents yarded 15,753 sheep, 128 more than last week.

The NLRS said the yarding consisted of very good quality lines of Merino wethers and crossbred ewes, with less lighter sheep. Other than one heavy sheep buyer who showed no interest, most of the processors operated throughout the market. Some local restockers attended and managed to secure a number of lines. 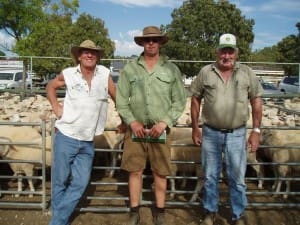 The Healy brothers from Euston, Pat (left) and Ray, with Landmark agent Tim Ferguson, sold 1600 head at Ouyen this week.

At the Ouyen Livestock Exchange on Thursday, the agents yarded 11,500 lambs and 3800 sheep.

OLE superintendent Kate Pohlner said lambs sold to weaker competition, following the market trend and due to the absence of one major export buyer. Prices for all weights and grades were $10 cheaper than last sale.

The NLRS said a smaller field of trade and processor buyers was present along with a number of restocker orders. Prices for lambs fluctuated with the lighter weight selection receiving help from restocker competition to remain firm.

The NLRS said the quality of the yarding was very plain with limited numbers of prime lambs or heavy weight ewes. Merino lamb numbers were solid but most were very light condition young drafts. Lambs suitable for air freight processors and feeders were well-supplied and demand was very strong. All buyers were present but they were more selective.

Ewe prices eased $5 for the light weight categories and other categories remained firm. Prices were mixed, with the light and lighter conditioned drafts easing around $6 and selling from $30-$58. The 2 score mutton to processors made $40-$80 to average 278c/kg cwt, equal to last week. Ewes in 3 score condition, including heavy weight drafts, made $60-$80 and were firm at 280c/kg cwt. Restockers were active on suitable light conditioned and longer wool drafts which included ewe hoggets from $40-$88. Ram prices remained similar, with ram lambs selling to $90 and young drafts to live export and export feeders making $30-$76. Old rams to processors made $10-$55.