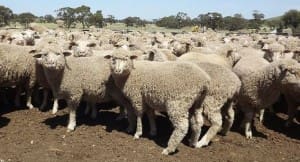 LAMB and sheep prices lifted in saleyards on Friday, with yardings generally lower in the few New South Wales and Victorian centres selling.

Prices lifted up to $7 for light lambs, up to $4 for trade weights and up to $6 for heavy lambs, with increased processor and restocker competition.

On Friday last week, the National Livestock Reporting Service’s Eastern States Daily Indicators for lambs lifted for all but restocker lines, although all categories recorded overall losses for the week.

The ESDI for mutton gained 2 cents to 284c/kg on Friday, down 8 cents for the week, and the national indicator also lifted 2 cents, to 285c/kg.

On AuctionsPlus last week, sheep and lambs lifted 29,030 to 98,438 as dry conditions continued across Australia, forcing earlier marketing of lambs, ewes with lambs and dry sheep.

AuctionsPlus market operations officer Anna Adams said young Merino ewes sold to $160 and Merino wether lambs made up to $94. Continuing dry conditions and early turnoff of lambs had an effect on clearance rates, though less so on price, she said.

Merino wether lambs in South Australia were a large portion of the Spring Store Lamb sale on Thursday and made from $50.50-$80. Elsewhere, wether lambs sold from $32-$94 to average $70, down $4 on last week.

The NLRS said lamb quality was very good across all grades, with plenty of well-finished lines. Mainly trade and heavy weight new season lamb were penned, along with fewer store lines. There were fewer old lambs. All the usual buyers operated except one and competition was stronger, resulting in a dearer market.

The NLRS said 4800 mixed quality new season lambs were penned. More lambs showed dryness in their skins, though there were still some better pens available. The usual buyers competed in a firm to dearer market.

The NLRS said lamb numbers remained seasonally high, with the dry weather forcing more light weight lambs onto the market. Only limited lines of quality export and trade lambs were in each agent’s run, before quality quickly fell away to store lambs.

There was more processor and restocker competition this week, and prices were mostly $3-$6 better than last week. The market reached a top of $135 for export weight young lambs. The supply of well-finished young lambs with weight was limited, and there was only four pens of export lambs that made $130-$135. The heavy trade weights sold from $122-$128. Most of the trade weight lambs sold to domestic orders at $102-$116. On a carcase basis, most slaughter lamb categories averaged 450-480c/kg cwt.

There was store lamb orders from Ballarat and Bendigo which pushed into light trade lambs at $101- $110. Most light lambs sold to the paddock made $68-$94, to average around $80.

The sheep market was stronger, with lightweight and trade sheep recording the best price gains. A small pen of longer wool Merino ewes sold for $90, while heavy crossbred ewes to slaughter sold from $63-$75. The general run of ewes sold from $45-$60.