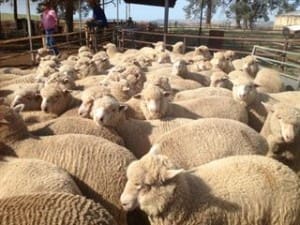 Processors took opportunities to re-supply with quality lambs and secure sheep supplies in most saleyards mid-week, lifting rates for mutton and across most lamb categories.

Producers benefited most at centres where processors returned to saleyard buying, and quality meshed with the clearing of OTH lamb and mutton bookings. A drop in supply, especially of mutton in NSW, and new orders for heavy mutton also helped to improve prices.

In NSW at the Central Tablelands Livestock Exchange at Carcoar on Wednesday, the agents yarded 9250 lambs, 4130 more than last week, and 3150 sheep, 1590 more.

The NLRS said the very good quality yarding of both trade and heavy weight new season lambs along with some good pens of heavy weight old lambs. Lightweight lambs were in limited supply.

It was a mixed quality yarding of mutton, where most grades were $3-$6 dearer compared to the previous week’s smaller yarding. The 3 and 4 score Merino ewes sold from $66-$77 while the crossbred ewes sold from $70-$84. Merino wethers sold to $77.

A couple of additional processor orders created a lift in prices for the lighter young lambs, while trade and heavy weights averaged around $5 cheaper. Most of the young lambs to restockers sold at close to firm prices, making $77-$92 to feed and up to $109 for first cross ewe lambs. Light processing lots ranged from $74-$100 with buyers favouring condition and finish. Trade weights made $88-$108, while a few heavy weights made from $104-$124. Most of the young lambs averaged 430c/kg-480c/kg cwt.

A plain quality run of mutton met solid competition to be mostly unchanged, with a few odd sales trending dearer. Light 2 score ewes made $41-$52 while medium and heavy ewes and wethers ranged from $52-$80, to average 220c/kg-300c/kg cwt.

The NLRS said lamb quality was very good, however skin quality slipped with more lambs showing dryness and seed contamination. Not all major domestic processors operated, however the usual group of export buyers competed in a dearer market.

Lambs suitable to turn-out were well-supplied and sold to solid demand. A smaller turnout of buyers purchased lambs above 18kg cwt to average $97. Lighter weight younger lambs were keenly contested ranging in price from $70-$87. Store orders were in place from Queanbeyan, Forbes, Cowra and the local area.

Mutton numbers were significantly lower and quality was mixed with all weights and grades represented. Merino ewes suitable for the trade were in reasonable supply, and prices were generally $8-$9 higher. Trade sheep made from $65-$88 to average 294c/kg cwt. Heavy sheep were well-supplied.

Elders Wagga livestock manager Glenn Fordyce said there was more processor interest on one of Wagga’s best quality lamb yardings for the season.

“It is much appreciated.”

Mr Fordyce said the market lift was due to a number of factors including yarding quality, a drop in numbers elsewhere and the clearing of OTH orders.

“Quality had a fair bit to do with our lamb job.”

In Victoria at the Horsham saleyards on Wednesday, the agents yarded 16,784 lambs, 650 more than last week, and 4764 sheep, 214 more, for the usual buyers, plus some extra feeder and restocker competition.

The NLRS said quality was again average to good with reasonable numbers of trade and heavy lambs penned, although a lot of lambs showed dryness in the skins. Best quality lambs sold mostly unchanged with others generally $2-$3 easier than last week. Feeder and restocking activity was again strong, with lighter drafts selling from $46-$64 and heavier lots selling from $69.50-$87.50. Lambs sold to local, Kaniva, Ballarat, Finley, Corowa, Rainbow and Mallee areas. Several pens of shorn young lambs were offered and sold mostly to restockers from $55-$78.

The sheep offering included many pens of well-presented Merino and crossbred ewes. Sheep sold to strong competition to be from $2-$10 up on last week and more in places, with a run of medium weight sheep, averaging around 290c/kg cwt.

The NLRS said about 80 percent of the lambs were new season lines. An increase in buyer attendance saw strong competition on the average to good quality lambs and the mixed sheep selection showing the effects of the season.

The better-conditioned 3 and 4 score trade lambs mainly sold equal to $1-$2 dearer with the lighter 2 score lambs being $2-$3 cheaper.

Heavy ewes up $18 at Bendigo

At the Bendigo saleyards on Thursday, the agents yarded 7821 sheep, 1656 more than last week.

The NLRS said medium and heavy weight Merino ewes dominated the yarding. All the regular buyers attended, and several exporters had strong orders for heavy slaughter mutton which created a much dearer market for the top pens of crossbred and Merino sheep. Heavy Merino sheep were $13 to $15 dearer, with the best ewes making $80 to a top of $102 and averaging close to $87. On a carcass basis most sales averaged between 300c/kg-315c/kg cwt.

Heavy 4 and 5 score crossbred ewes, which had been discounted in recent weeks, were $18 dearer and sold to a top of $95, averaging close to $90. There weren’t many quality lines of Merino wethers in the yarding, with the best at $89 to a market top of $103 to also average over 300c/kg cwt.

Prices for medium weight sheep, were mostly $5-$6 dearer at $60-$84. Bucking the dearer trend were plain and light weight sheep, with feedback from buyers suggesting meatworks have good supplies of light mutton at present. Light sheep were a few dollars cheaper at $15-$45. Restockers paid up to $50 for rams, while those sold to slaughter made $5-$39.

The NLRS said there was a small restocker presence that bid on selected pens of light lambs. However, the majority of the market sold to the usual following of trade and processor buyers at an easier trend.

Lightweight lambs sold mainly from $57-$80 to be up to $4 easier and 2 and 3 score trade lambs were also marginally down. Trade lambs saw the worst of the downward trend to be $5-$8 easier and more in places. Heavy lambs also followed the easier prices. However, they were not affected as much and ranged from $112-$125, to average 422c/kg cwt. Heavy export 4 score lambs sold from $124-$132.

Lamb restockers pay up to $4 more at Katanning

The NLRS said most lamb were lighter weight and store crossbred drafts, with reasonable supplies of young Merinos. Quality across the mutton yarding continued to slip with more plain conditioned drafts, but the lamb quality remained quite good but lacked prime trade and heavy lamb numbers. Restockers kept the market for light lambs very solid and paid up to $4 more. However other categories lacked adequate demand and prices eased around $2-$5.

Ewe prices were affected by supply and quality with most prices easing around $3. Light and plain lines sold from $35-$48, to be close to firm with most 2 score processor mutton slipping $3 with sales from $40-$62, for a $54 average.

Better 3 and 4 score ewes, including heavy weight drafts, made $52-$80 to be $2 easier and close to 240c/kg cwt. Restocker interest in ewe hoggets was firm with most sales from $45-$70 and firm. Mature ewes to restockers made from $43-$74, slightly dearer week-on-week. Wether prices were easier with export weight drafts slipping $5, from $60-$76, mostly to processors. Lighter conditioned and store drafts were purchased by restockers made from $60-$81, to be $4 cheaper. Rams sold at firm prices with most going to restocker orders at $25-$50. Old rams to processors made from $5-$40, to be firm on last week.