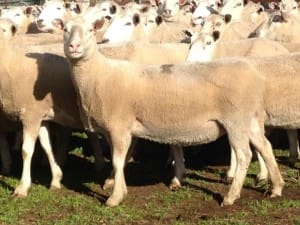 BREEDING sheep continued to feature in online sales last week, while lamb and mutton prices in saleyards were mostly firm to cheaper on Friday, except where numbers and quality lifted buyer competition.

Quality trade lambs for domestic consumptions continued to attract the most competition at around 600c/kg cwt with rates for plainer and heavy export lambs mostly around 530-580c/kg.

Merino ewes and ewe lambs offered across all age ranges dominated the sales week, she said.

The top price of $166 was paid for a big line of 57kg lwt hoggets with a 10cm fleece and joined to Cottage Park and Hazeldean Merino Rams from Tarago NSW.

The National Livestock Reporting Service Eastern States Daily Indicators for lamb and mutton mostly fell slightly last Friday, finishing off a week of rate drops. The exception was the light lamb indicator, which closed at 567c/kg, up 4 cents after Friday, and down one pone cent for the week.

The ESDI for mutton closed down 3 cents to 392c/kg on Friday, giving an 8-cent drop for the week. The national mutton indicator was back 3 cents to 391c/kg.

The NLRS said lamb quality was similar to the previous sale and there were good numbers of well-finished and grain assisted lambs. Heavy and extra heavy weight lambs were well-supplied. The usual buyers competed in a firm to dearer market.

The NLRS said the increased yarding of lambs led to a few more of the regular meat buyers attending the sale and prices were firm to dearer. The lead pens of trade weight lambs sold to the best demand, although some of the price improvement was due to their better quality.

The market reached a top of $185 for a pen of heavy export lambs. Bidding for light weight slaughter lambs improved and most made $72-$100. Very small lambs sold from $46-$69, with odd pens selling to local restockers. The lead pens of trade weight lambs made $134-$153, with the best of these making an estimated 590-620c/kg cwt. Bidding for secondary bred and finished domestic lambs was still selective at times, especially on small pen lots of just a few head. Prices for these plainer lambs generally ranged from $106-$129, or from 530-580c/kg. A limited offering of heavy export lambs mostly sold from $160-$185.

The quality of the sheep was mixed. Heavy crossbred ewes sold from $95-$135, while medium and lighter weight ewes made $60-$92. Carcass prices varied due to the limited numbers and quality, with the general run of mutton estimated at about 340-350c/kg cwt.