Lamb and mutton prices falter in some saleyards 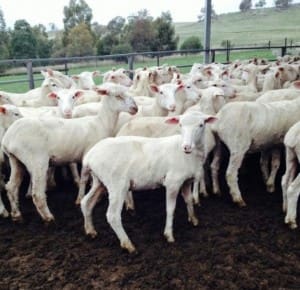 These 14.6kg cwt White Suffolk cross lambs sold for $110.50 at Boorowa on AuctionsPlus this week

The ES daily restocker lamb indicator also closed lower, down five cents to 559c/kg cwt and the light lamb indice is at 535c/kg cwt, a drop of four cents. Only the Merino lamb indicator lifted, by two cents to 491c/kg cwt. The ES mutton indicator is down four cents to 344c/kg cwt.

The national indicators were also all down, with the trade indice down five cents to 547c/kg cwt, the heavy lambs down by three cents to 556c/kg cwt and mutton off by four cents to 344c/kg.

Market hasn’t opened as strong as it finished

Kerr and Co Livestock manager and auctioneer at Hamilton Craig Pertzel said the lamb market hasn’t opened with the same gusto that it finished with prior to Christmas, nor has recent rain lifted the market significantly.

“I still think the market price is trading between 520-560c/kg cwt, with isolated sales where the price has touched 600c/kg.”

Mr Pertzel said shorn lambs are starting to come back into the market and he expected the lambs would be yielding better than lines earlier this summer.

“Probably in a lot of cases they are coming back in a little bit earlier than what they normally would, with a little less pelt on them, purely and simply because their agents is advising them to take the money while it is on with their first run and then go again in March-April.”

Mr Pertzel said croppers who have put lambs back onto stubble can tend to dump lambs and flatten markets.

He said although many lambs were bought by restockers last year, a lot more lambs were killed earlier last year due to the season.

“All the processors have all got this MK (Middle Eastern kill 12-18 kg cwt) order and we are not seeing a lot of those (lighter) lambs again this year.

Unlike in other areas with lucerne, Western District producers are less willing to buy back lambs to finish in pasture, but Mr Pertzel said many clients will shear their own secondary lambs for later marketing.

He has been happy with the solid sheep markets at Hamilton over the past two weeks.

“I think sheep might have more room to get even a little bit dearer as we go into the autumn.”

The NLRS said the plainer quality yarding had a more young lambs lacking finish along with good numbers of Merino lambs and hoggets. There were a few good lines of heavy weight new season lambs, some excellent heavy weight old lambs and a fair number of trade weights.

At the Goulburn saleyards, the agents yarded 1800 lambs and 1300 sheep.

The NLRS said the mixed quality yarding included a fair portion of young lambs but most showed dryness in the wool with increased levels of seed infestation. A good run of Dorper lambs provided the best finished lots. A few extra buyers produced a generally dearer market of around $3-$4.

It was a stronger mutton market for the generally good quality offering that included some larger runs of Merino wethers. Medium and heavy ewes made from $62-$100, while most of the Merino wethers ranged from $78-$118. Most of the mutton averaged 330c/kg-390c/kg cwt.

The NLRS said quality slipped. Trade lambs were in reasonable supply with a good number of young supplementary fed shorn lambs. Well-shaped trade lambs were keenly sought by all processors, however plainer lambs lacking finish were overlooked by some buyers. The usual domestic and export buyers competed in a cheaper market for trade lambs. Secondary lambs suitable to restock or feed were in greater numbers and all types sold to solid competition from a large contingent of local restockers.

Bidding was strongest for well-finished heavy shorn trade lambs from export and domestic buyers. Most of the heavy trade lambs made 550c/kg-570c/kg cwt, reaching a top price of $148. Trade lambs 18-20kg were keenly sought by both restockers and processors with lambs to slaughter averaging $112.70. Light weight plain lambs sold to varying price trends with some export processors struggling to capture adequate supplies owing to strong restocker competition. The plainer conditioned lambs returning to the paddock made from $62-$72, while well-bred secondary lambs averaged $111. Lambs to the feedlots made from $106-$122.

Heavy export lambs were in reasonable supply and sold to strong northern competition. Heavy and extra heavy lambs sold from $155-$196, with a single pen estimated to weigh 38kg cwt reaching a top price of $198. Most heavy lambs ranged from 540c/kg-570c/kg cwt.

Mutton quality was quite mixed, with all weights and grades represented. Merino ewes suitable for the trade were in reasonable supply and made from $56-$91 to range from 301c/kg-330c/kg cwt. Heavy sheep were well-supplied and prices were generally a few dollars dearer for Merino ewes and wethers. Heavy Merino wethers made from $92-$130, to average 329c/kg cwt. Restockers operated plainer conditioned Merino ewes at $83-$92.

In Victoria at the Hamilton saleyards on Wednesday, the agents yarded 18,674 lambs, 7370 more than last week.

The yarding comprised 75 percent new shorn lambs and some late new season lambs, most being spring drop light to light trade 2 to 3 score types. Some very good quality 22-27kg cwt shorn lambs were penned. Most processor buyers attended but not all operating fully and prices came back in all classes. Restockers were very active, seeing good opportunities as the market fluctuated, and rates continued to trend downward towards the end of the market. Store buyers came from Naracoorte, Millicent and many from the local area after the recent rains in the district.

There was a big jump in lamb numbers this week with another good quality yarding offered to the usual buyers plus some extra competition. Well-presented extra heavy shorn lambs sold to firm competition and reached a market top of $182.

Lighter weight lambs sold a little dearer with the trade and heavy lambs a few dollars down on last week. Restocking activity was strong on suitable lots and they paid mostly from $69-$105.

At the Hamilton saleyards on Thursday, the agents yarded 15,989 sheep, 3390 fewer than last week.

The NLRS said the offering was mostly very good quality heavy weight and lighter conditioned ewes with about 25pc of the yarding Merino wethers. All buyers were present but one processor was not operating which seemed to have an adverse effect on the sale, with mutton selling at slightly lower prices. There was no restocker activity.

The NLRS said large runs of good quality shorn lambs came forward and sold to solid competition from the usual trade and processor buyers. Restockers were also active. Prices for the lambs were dearer across all categories while sheep were slightly easier.

The NLRS said the very hot conditions possibly affected deliveries. Ewes were the largest category and there was a reasonable number of crossbred lambs. Merino lambs and wethers were in moderate supply. Quality was fair with some good lines of Merino ewes and a small number of prime trade and heavy lambs. Many of the ewes were in lighter condition and the majority of the lambs were secondary and store conditioned lighter weight drafts. Competition varied throughout the sale with prices improving as the sale progressed and some buyers sought to secure numbers. Most prices were back marginally with quality the main contributor.

Ewe prices started the sale $5 easier but lifted as the sale progressed and restocker demand lifted, to finish close to firm.

Wethers sold at similar prices with processors purchasing the very heavy and crossbred drafts for $78-$105. Live export paid $68-$96 for suitable drafts, also similar, with light and store wethers selling from $45-$83 to be firm on last sale. Ram lambs sold to a top of $92.50, with most young drafts making $30-$65 and older lines to processors selling from $5-$50.