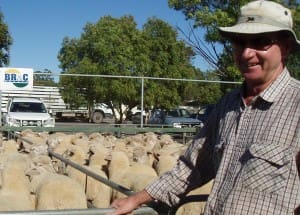 Happy Ouyen saleyard seller, Les Stone from Torrita, with his pen of crossbred lambs that made $179.60 on Thursday

Prices for quality trade and heavy lambs started to rise in saleyards across Australia mid-week as supplies of well-finished lambs with weight fell nationally.

Mutton prices also gained ground again on the back of rapidly declining yardings at most saleyards, with the Eastern States Daily Indicator at 357c/kg cwt, up seven cents.

In NSW at the Central Tablelands Livestock Exchange at Carcoar on Wednesday, the agents yarded 5500 lambs, 4000 fewer than last week, and 3900 sheep, 800 fewer.

The NLRS said the improved quality yarding of lambs had outstanding heavy weights and a fair number of heavy trade weights. There were fewer light weight lambs than last week.

The NLRS said it was a generally plainer yarding. The longer wool young lambs lacked condition, but there were a few better-finished shorn lots. Restocking lambs were scarcer, while Dorpers were again well-supplied.

Sheep quality was also mixed, but there were some good lines of younger Merino sheep that met strong restocker competition in a generally firm to slightly cheaper market. Young Merino ewes to restockers made $103-$121. Light 2 score ewes to process ranged from $50-$76, while medium and heavy ewes and wethers made $62-$110 for most of the better-covered slaughter sheep to range from 320c/kg-360c/kg cwt.

The plainer conditioned lambs returning to the paddock made from $69-$86, while well-bred secondary lambs averaged $110.50, lifting $7. Light lambs to the processors ranged from $84-$108.

Mutton quality was quite mixed, with all weights and grades represented. Merino ewes suitable for the trade were in reasonable supply and made from $54-$86. Heavy sheep were well-supplied and prices generally weakened $3-$7, due to not all major northern export processors operating fully. Heavy Merino wethers made from $87-$120, to average 357c/kg cwt. There were more heavy crossbred ewes and they sold from $108-$119.

In Victoria at the Hamilton saleyards on Wednesday, the agents yarded 13,592 lambs, 5082 fewer than last week.

The NLRS said while one of the usual processor buyers was not operating, the three remaining competed strongly, lifting prices in all weight ranges and regaining last week’s falls. Restockers were also consistently active, with at least five agents from South Australia, some local order and some from the Shepparton area, paying from $56-$107. Less young lambs with length in skins were yarded and half the yarding were light to light trade lambs that averaged $7-$10 dearer. Medium trade weights averaged $4-$5 dearer and the fewer heavy to extra heavier lambs, sold $5-$6 better.

The NLRS said the quality of the lamb penning was good. Most of the regular buyers operated strongly in a dearer market, with quality lambs lifting up to $10 and more in places. Outstanding, extra heavy shorn lambs reached a market top of $195. Restockers paid to $74 for lambs and $106 for young crossbred ewes.

The plainer sheep offering included many good runs of Merinos and crossbred sheep, selling to strong demand to be to $10 dearer. 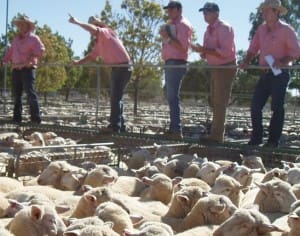 The Elders Ouyen team selling lambs for Walpeup producers D. and C. O’Shannessy for the sale top price of $186 on Thursday

At the Ouyen Livestock Exchange on Thursday, the agents yarded 12,000 lambs and 2600 mutton.

OLE superintendent Kate Polhner said the regular buyers attended, but not all were active. Following market trends, prices for quality export lambs reached $186 or 550 c/kg cwt and a quality pen of Dorper lambs sold to $155. 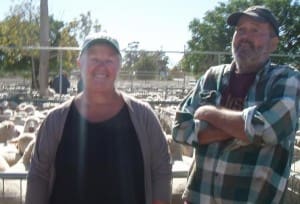 The NLRS said lamb quality was mixed with less weight available for buyers. Lambs sold to dearer rates in all categories to restockers and to the usual trade and processor buyers.

The NLRS said ewe mutton dominated the yarding with moderate supplies of trade lambs and solid supplies of light Merino lambs available. All the usual buyers were active, with most categories firming. Wether drafts suitable for live export were strong as were light lambs suitable for feeders and air freight processors. Trade lamb and ewe mutton lifted largely due to limited supplies.

Ewe mutton sold from firm to $5 dearer, with the light weight drafts making from $38-$65, to average $5 dearer. The 2 score mutton to processors made $55-$75, to be up slightly at 305c/kg cwt. The 3 and 4 score mutton, including heavy weight crossbred drafts, made from $72-$90, close to equal week-on-week. Restockers were active on ewe hogget and suitable mature ewes with most sales firm and from $50-$71.