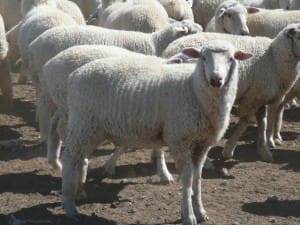 These 13.5kg cwt Coolalee-Dohne cross lambs at Mungindi, NSW, sold for $100 on AuctionsPlus this week

Over-the-hook lamb and mutton rates increased or held firm across Australia mid-week as buyers attempted to put the brakes on saleyard prices at some major centres, especially where quality was mixed.

After Tuesday’s saleyard sales, the NLRS Eastern States Daily Indicators were down eight cents for trade lambs to 555c/kg cwt and down 11 cents to 571c/kg cwt for heavy lambs. The restocker lambs ESDI lost six cents to 565c/kg cwt, the Merino indice fell nine cents to 503c/kg and light lambs dropped nine cents to 549c/kg. The ES mutton indicator was down two cents to 361c/kg cwt.

In NSW this week, the NLRS said over-the-hook lamb rates across all weight categories increased, with some contributors lifting their rates in line with others. Light and medium weight mutton rates were unchanged, while heavy weight lines gained eight cents, to average 343¢/kg cwt.

In SA, the NLRS said the majority of contributors made upward adjustments to lamb over-the-hook rates this week, with trade and heavy weight carcases an average of 23c/kg cwt dearer. Light and heavy weight mutton rates lifted 8c/kg cwt.

The NLRS said it was a mixed quality yarding, with some top heavy weight lambs yarded, along with a fair supply of trade weights. A good number of light weight lambs was penned.

The NLRS said lamb quality was fair to good. The yarding included lines of store condition young lambs. There was a good supply of trade weights and fewer heavy weight lambs. The usual buyers attended, but the extra trade competition of last week was absent.

Market trends in the trade and heavy weight lamb classes were generally cheaper. Trade lambs were least affected, down $2-$4 with some buyers commenting that domestic demand is weaker. Heavyweight lambs sold cheaper by $7-$10.

Restockers were active on the large run of young lambs, with prices showing little change but quality related week-on-week.

The fair to good quality penning of sheep contained better quality and condition lots in the medium and heavyweight classes that sold to a dearer trend, up $3-$5 on average.

The NLRS said the lamb and mutton yardings were affected by the continuing dry season. Lamb quality was similar to the previous sales, with good numbers of finished lambs along with a slight increase in the number of plainer lambs. The usual buyers competed in a cheaper market.

The usual buyers operated strongly when compared to the market of two weeks ago, with trade and heavy lambs improving $5-$10 and more in places. An outstanding pen of extra heavy lambs reached a market top of $202.

The sheep offering included several runs of heavy crossbred ewes, and well-presented Merino wethers and ewes. When compared to the sale of two weeks ago, lighter sheep sold firm to a few dollars dearer. Most other sheep sold at similar levels, though the Merino were wethers a little easier.

The NLRS said lamb quality was again good, with large numbers of trade weight and heavy lambs yarded. The usual buyers attended, although not all operated fully.

The sheep offering included all weights and grades, with some big runs of Merino and crossbred sheep. Merino wethers sold to very strong competition to be up to $10 up on last week. Merino ewe mutton prices also started strongly but eased as the sale progressed to finish similar to last week. Some of the crossbred sheep sold a few dollars easier. Restockers were very active paying from $68-$99.60 for some large runs of Merino wethers, both recently shorn and carrying a good skin.

The NLRS said the generally very good quality yarding of crossbred and Merino lambs sold to declining demand from the usual trade and processor buyers. Feeder and restockers were active on suitable lambs and shorn crossbred lambs in the light weight category attracted animated bidding from feeders.

The NLRS said the usual trade and processor buyers and a small restocker presence attended the sale. Overall lamb prices were easier, while sheep sold firm on last week’s rates.

The NLRS said lamb quality was mixed with more trade and heavy lambs. However, most lamb drafts were either secondary quality or light weight.

Prices for better lambs increased $3 with most other categories firm. Very light and store lambs, including Merino’s, were available in large numbers with prices mostly dearer at $25-$65. Light lamb to feed, suitable for air freight processors and for restockers were marginally dearer and made $60-$97.

Ewe mutton supplies included some good heavy weight drafts, but most were of plainer condition. Buyers were active from all sectors with live export active on wether and select ram drafts. The majority of ewes from firm to $3 dearer, after an easier start.

Restockers purchased light and longer wool ewe drafts at similar prices to last week. Wether prices lifted under strong live export and processor competition. Heavy wethers sold from $90-$119, with live export sales from $80-$105. Lighter wethers and store drafts were also firm, making $45-$90 to restockers and feeders. Ram sales were solid with ram lambs from $60-$90 and other young drafts to live export and feeders from $30-$80. Old rams again sold from $10-$55.