IT was a lacklustre finish to the year for the wool spot auction and forward markets.

Great promise early, but lack of substance, pretty much sums up the year in a macro health and economic sense.

The forwards traded again in light qualities at flat to a slight premium. This trend has remained all year.

The graph below highlights that sellers, in general, have been able to secure a premium compared to spot when hedging.

This followed the general trend of the market over the year. 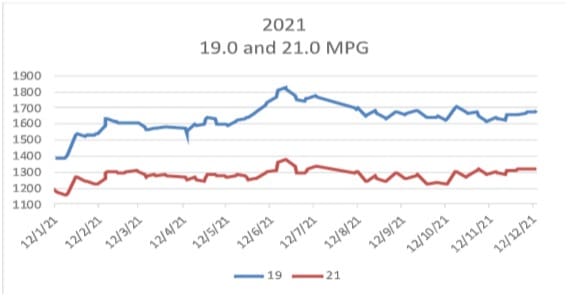 The table below sets out the absolute movement over the 12 months. In what graphically looks a fairly stable year, the ranges are reasonably wide. The forwards traded in a tighter range and averaged 1 percent higher on the 19 micron contract and 2pc higher on the 21 contract.

We expect next week to follow a similar pattern. Buyers are still keen to be paid flat throughout 2022 and into the first half of 2023 to hedge their positions. Stock carrying is not something anyone wants to take on board in the current tight fiscal environment.