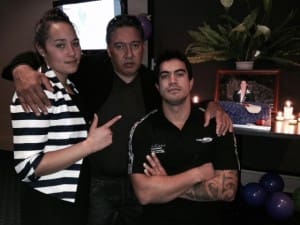 And based on plans being made by the organisers of the main wool handling and shearing events across Victoria, that’s exactly what will happen later this year.

Champion New Zealand woolhandler, shearer and presser Joanne Kumeroa died in New Zealand on April 16 after a three-year battle with cancer. She came from the Whanganui River area of NZ’s North Island. Kumeroa was 45 and won more world, Golden Shears and New Zealand titles than any other competitor, and was regarded as the “David Fagan of woolhandling”.

She won world individual woolhandling championships in Edinburgh in 2003 and in Toowoomba two years later, when she also won the first of three world teams titles, followed by Norway in 2008 and Masterton in 2012. The veteran of 14 of Masterton’s Golden Shears open woolhandling finals from 1990 to 2013 won the big title six times – in 1995, 2001, 2004 and consecutively from 2010 to 2012. Last year she overcame pain from her cancer to win the open wool handling event at Warrnambool.

Romney Shears president and RIST traineeship program leader Louise Cameron said the open wool handling events at the Warrnambool Show and at Hamilton next year would form two legs of a proposed tri-series award to commemorate Kumeroa’s contribution to the industry. The third tri-series venue is to be finalised.

“Definitely it will be at the Warrnambool and Hamilton shows – it will be a tri-series with a third show negotiating to come into the series,” Mrs Cameron said.

Open wool handlers who compete at the three events will be eligible for the Jo Kumeroa commemorative award, that will be judged on the best quality points.

“The winner will be announced at the Warrnambool Romney Shears.”

Mrs Cameron said Joanne Kumeroa did not discriminate about who she helped.

“She was open to anyone who wanted to improve themselves with woolhandling; she would help anyone.”

Former Romney Shears president Jim Robinson said Joanne Kumeroa should be remembered with a commemorative trophy at Warrnambool this year.

“She has competed at least 10 times and won about eight times at Warrnambool,” he said.

Mr Robinson said the “rub-off” from Joanne’s training work with the Shearing Contractors Association of Australia over the past 18 months was showing in the performances of woolhandlers like Sarah Moran and others. He said Joanne contributed greatly to Sarah and Tara Smith’s win in the Trans-Tasman test at the Golden Shears this year.

“Year-in year-out she was probably the best I’ve seen compete at Warrnambool.”

Friends share memories and perform a haka for Joanne

About 100 people attended the memorial service in Hamilton, with friends and workmates sharing their memories of the renowned woolhandler, drank a toast and performed hakas in her honour.

Shearer Tony Cook said Joanne Kumeroa liked to pass on her knowledge to other woolhandler. He said she was always very professional in sheds, willing to help young woolhandlers and very good at her job.

Joanne’s niece Denise Murray said Joanne “set the bar for the world in woolhandling and everything.”

Joanne had awards for pressing, woolhandling and shearing – “she could do it all”, Ms Murray said.

“We’re a shearing whanau – we are not all related – but we grew up together, we all fit in somewhere – and she was our queen, Australia and New Zealand.”

Joanne’s nephew Lee Brown stayed with his “aunty” when he first came to Australia and led a haka in her honour.

“She got me on my feet — she helped me up, gave me a roof over my head.

“I miss her advice, I miss her love – she always had good advice for me,” he said.

“One thing I loved about aunty is that she had the biggest heart and her door was always open for anyone.

“She is very unique and she has touched a lot of people.”