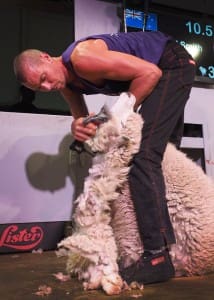 NEW Zealand shearers Rowland Smith and John Kirkpatrick have broken a 13-year jinx to beat Scotland in a test match at the Lochearnhead Shears during the weekend.

New Zealand hadn’t beaten Scotland in any of the countries’ annual tests at Lochearnhead since 2003, and this year’s team, both from Hawke’s Bay, had only just arrived in the Northern Hemisphere for the first match of their five-test CP Wool UK Tour.

The race was dominated by Taranaki-based Scotsman and 2012 World champion Gavin Mutch who shore his 17 sheep in just 12 minutes 23 seconds – almost a minute before the next man off Rowland Smith.

But in doing so, Mutch, from Huntly, Aberdeenshire, and winner of four Open finals in a row in England, Wales and Scotland in June, had incurred a maximum 5-point penalty on one sheep; a most telling factor, as the Kiwis got home by just 1.685 points. Mutch’s teammate, Callum Shaw, of Saline, Fife, claimed the individual honours.

Kirkpatrick and Smith both reached the Lochearnhead Shears Open final, which was won by home-town shearer Hamish Mitchell, with whom Mutch won the World teams title in 2014.

There was a big New Zealand success in the Lochearnhead Shears bladeshearing final, won by Canterbury shearer Allan Oldfield, with father Phil Oldfield the runner-up. The pair come from Geraldine, Phil Oldfield having joined his son in the UK a month after Oldfield Jnr had scored a unique treble of wins in open bladeshearing, junior machine shearing and novice woolhandling.