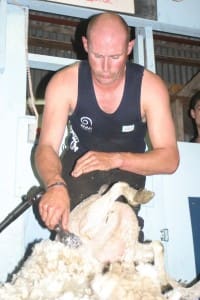 Australia’s shearing and wool handling skills are in good hands if the standard of clip preparation at Warrnambool’s iconic Romney Shears event at the weekend is any guide.

That’s the opinion of veteran Romney Shears organiser Jim Robinson who said the standard of wool handling, and the number of rouseabouts competing, were the highest ever at Warrnambool.

About 60 wool handlers and 80 shearers from Australia and New Zealand competed at the event over the weekend, during the annual Warrnambool Show.

The high entries highlighted the training work being done by the Rural Industries Skills Training (RIST) centre at Hamilton, the Shearing Contractors Association of Australia and in New Zealand, Mr Robinson said.

Buick was set for victory

Mr Robinson said the Romney Shear was Buick’s first big shearing win and he seemed set for victory after he shore 199 Coopworths in six hours in practice before the weekend.

“You could nearly see your face in the sheep.

“They were absolutely polished.”

David Buick has had six shearing wins in New Zealand over the last three seasons, including twice at Apiti — a major event just before the Golden Shears. He has also shorn in one Golden Shears Open final, and two New Zealand Open finals, placing third in 2013.

Dion King won the Mortlake Quick Shears in 23 seconds before the Warrnambool event and shore 230 sheep in three runs at Woolsthorpe before the event.

On Friday, King and Buick combined as the Te Kuiti team in a 50-sheep speed shearing event, to finish in 49 minutes and 59 seconds to beat the North Auckland pair, Doug Smith and Neville Osborne (51.34). The SA team, Tyson Scholz and open blade event winner John Dalla, were third in 56.13 minutes, beating the Tasmanian team into fourth.

In the Warrnambool-Te Kuiti test, King, Haynes and Buick combined with wool handlers Joanne Kumeroa, Candida Johnson and Tina Elers, but lost out to the local team of shearers comprising Wingfield, Evo Hennessey and John Dalla, and wool handlers Dave Summers, Mel Morris and Sophie Huf. The Aussie shearers won 236 points to 283 points and the wool handlers had just 41.68 penalty points versus the NZ score of 44.29.

Hamilton-based Kumeroa showed why she was a six-time world champion by winning the open wool handling at Warrnambool with 28.5 penalty points from Sophie Huf (30.65), Candida Johnson (34.90) and Dave Summers (38.10). Dave Summers at 53 years of age and returning to competition after a 12-year break was voted the best local wool handler in the event and Evo Hennessey the best shearer.

Victorians Jason Wingfield and Glen Stephens from Heywood won the shearing section of the Jim Davidson event and the winning wool handler was Joanne Kumeroa. The top senior shearer at the event was Ramone Smith, from Luke Askew and Dylan Wilson, and Jane Summers won the senior wool handling from Kirsty Lehmann and Rochelle Hepi. The best senior shearer was Turi Edmonds, with Josh Bone second and Darren Alexander third.