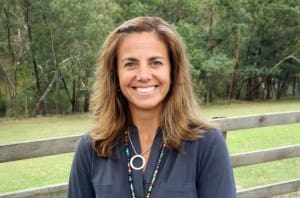 Mansfield sheep and cattle producer Kim Stoney wants to start educating the next generation of voters on agricultural policy a little earlier than most.

She is in the running for the Victoria’s 2015 Rural Industries Research and Development Corporation (RIRDC) Rural Women’s Award, with the winner set to be announced later this week.

With a busy sheep and cattle farm and four young children aged five and nine-years-old, Kim has seen the learning benefits her children receive from growing up on a farm.

From this practical farming background, Kim has developed ‘The Farmhouse’ Child Care Centre on the outskirts of Mansfield, to encourage a learning environment for children based on the natural environment around them.

If she is successful in the award judging, Kim’s project will deliver ‘The Toolbox’ to 200 early childhood services across Victoria so they may also experience nature-based learning. The toolbox includes physical tools such as tape measurements and shovels, plus discussion, goal-setting and decision papers, to help centres make changes to include nature-based learning.

“Hopefully we can make a massive impact to the children who attend those centres.

“In many ways, what I am trying to achieve in enhancing early childhood services, is to have more outdoor nature, food and fibre activities in centres.”

Kim hopes to help motivated services to work through regulations and restrictions that might prevent them from offering “environmentally-engaging” experiences to their children.

Outcomes could include planting tyre casings with herbs, building a chook house with a trailer cage or making wool dolls from wool.

“It’s about looking at your own environment and saying what can we do here that is reflective of the family’s of the children who come here.”

It started with collecting th

Kim said her project came about because although many of the toolbox’s activities were normal for her children were growing up on the farm, their visiting friends had “no idea” about farm life and could not even climb the post and rail fences between the farmhouse and the chookhouse.

“They were so excited to be able to go and collect the chooks’ eggs if I was making a cake.

“I thought wow, they are from a country town and they don’t know what it is like to live on a farm.”

Consistent with her theme of providing a “childhood” rather than “childcare” at her Mansfield centre, today the ‘The Farmhouse’ had a calf, rabbits, guinea pigs and chooks in its licensed space, with a post and rail fence for climbing over.

“So it’s a farm backyard and that’s what I wanted.

“I think we should be doing better by our children and that they should grow up with the respect and appreciation for food and fibre production,” Kim said.

“Ultimately we are children for such a short amount of time and then long term we are adults and voters on agricultural policy.

“The divide between city and country is only growing because less and less people will have that connection to the country through an uncle or a grandfather or someone,” she said.

“If we can instill that in children then they will grow up to be adults with respect for food and fibre production and hopefully will more intelligently consider agricultural policy when they are voters.”

The Rural Women’s Award identifies and supports emerging women leaders. The finalists were selected by an independent panel based on the strengths of their projects – work that would benefit from winning the award – and their commitment to the sustainability of primary industries.

The Minister for Agriculture Jaala Pulford will announce the winner at a ceremony at Parliament House on Thursday, March 19.

The Victorian winner will receive a $10,000 financial bursary to implement their project and have the opportunity to participate in the Australian Institute of Company Directors (AICD) Company Directors Course.

The other 2015 Victoria Rural Women’s Award finalists are:

 Katie Finlay, a third-generation orchardist from Harcourt, who has diversified her business by writing and selling a range of information products for home fruit growers;

 Dr Melissa Ferrier is a clinical psychologist with a special interest in neuroscience and rural mental health; and

 Amanda Garner from Birregurra, who runs an expanding catering business and has a passion for local food produce.

The award is supported by the Department of Economic Development, Jobs Transport and Resources (DEDJTR) and acknowledges women’s leadership capacity to effect change and build resilience in primary industries and rural communities.