IT wasn’t a record, but the $446 per head top price exchanged for young crossbred ewes with lambs was considered good buying and good selling at the Wycheproof store sheep sale on Friday.

The season-high price so far was, in fact, not a stand-alone result for the Elders sale, as another pen of young ewes with lambs also crossed the $400 a head level, selling for $412.

As good as the sales were, the ultimate high for similar yards of young ewes with lambs sold at the north-west Victorian saleyards was a rate of $460 a head outlaid back in the spring of 2016. 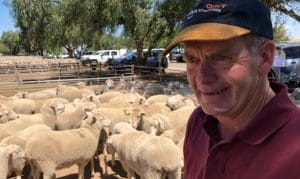 The Brenco Farming ewes and lambs from Wycheproof South were sold through TB White and Sons, Ballarat to Tony Torpy of Newlyn.

Mr Torpy said although he had bid more than he had wanted, the line was a required replacement for older ewes that would be classed and sold after raising their next crop of lambs.

“We are buying these earlier than normal,” Mr Torpy said.

“There is a risk in this decision as our season is not assured, but we believe it may be more difficult to buy next year rather than now.”

The market’s second yard to cross the $400/head threshold was a line of 234 April/May 2018 September shorn first cross ewes sold by the Pollington family of Nullawil. The ewes had 260 Southdown lambs with them and were Gudair vaccinated for Ovine Johne’s Disease. The buyer was a client of Mt Gambier agency, O’Connor & Graney.

Elders Wycheproof agent Jim Coffey said the interest in the unjoined lots of young ewes began cautiously, but intensified as the sale progressed, especially on the smaller pen lots. 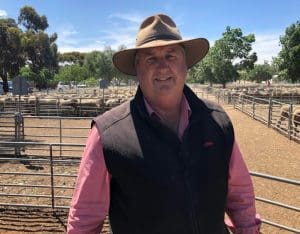 “We still require clean sheep from the biosecurity areas for entry in SA, but the change in regulation will now make it easier for Victorian lines to be imported,” Mr Heinrik said.

Other smaller lots of 2018 drop first cross ewes were made from $292-$314. A single pen of April/May 2019 drop October shorn ewe lambs, mulesed and Gudair vaccinated, sold for $240 to a backgrounder at Charlton. These were offered by D & S Erwin of St Arnaud. 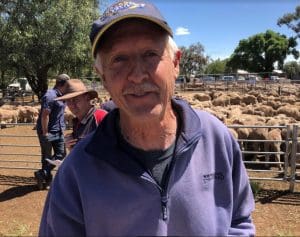 Rod Alexander was a keen bidder on Merino ewes for joining to Border Leicester rams on his property at Skipton.

The Merino ewe section followed a similar pattern to the crossbred sale, with agents finding it slightly more difficult to generate interest in larger lines, while smaller lines gathered plenty of traction.

This was the case for 72 April/May 2018 drop maiden Fermoy ewes that had been joined to White Suffolk rams from 26 June to 21 August. Although their joining was considered as out-of-season for the northern country, the June shorn, Western Australian bred Napowie blood ewes sold for $250 to a St Arnaud buyer.

Other lots of young ewes, which varied considerably, at times, in pen size, frame size and shearing were all sold at intense interest in a tight band of prices from $225-$260, with only odd sales lower.

Elders Wycheproof agent Jim Coffey viewed these sales as incredible selling with as many as four or five bidders bidding on all pens.

This section of the market was purely driven by restocker interests with not a processor order in sight at any time through the 9100-head sale. 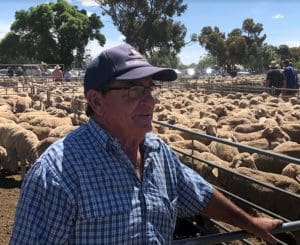 A large line of seasonally-affected Mungadel blood and bred July 2019 drop September shorn wethers from Carrathool, New South Wales created strong interest and made $96 for 566 and $80 for 265 to buyers from Quambatook and Birchip.