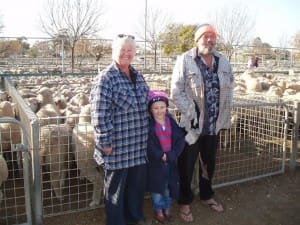 Marg, Izzie and Duke Nicholl sold their first suckers for $141 at Ouyen yesterday.

Most weights and grade were represented in a mixed mutton yarding, with most sheep selling $2-$4 cheaper. The 2 score ewes sold from $48-$78, while the better 3 and 4 score crossbreds made $78-$129 for crossbreds and some longer wool Merinos sold to $146. The few properly finished Merino wethers sold from $106-$124.

The NLRS said lamb quality was back on the last sale two weeks ago. There were fewer crossbred lambs and some were lacking bloom. There were more light Merino lambs. All the usual buyers attended, although not all operated in the firm to dearer market.

Mutton numbers lifted and quality remained mixed and included a lot more plainer lighter sheep. Prices for the lighter weight sheep were back $2-$7, but the heavy weights were firm. Medium weight Merino ewes with a big skin ranged from $72-$130. Heavy crossbreds sold for $140 and Merino wethers with a full jacket made to $154.60. Most averaged 380-420c/kg cwt.

Keen competition for lambs at Wagga

The bulk of the heavy trade lambs averaged 615c/kg cwt, reaching a top price of $164.60. Trade lambs, 20-22kg cwt, were keenly sought by all domestic processors, with the slaughter lambs averaging $142.50.

Mutton quality was mixed, with all weights and grades represented. Merino ewes suitable for the trade made from $84-$122. Heavy sheep were well-supplied and prices were generally unchanged to a few dollars dearer. Merino ewes made from $110-$133. There were more heavy Merino wethers and several lots with very little skin value sold from $118-$130, to average 439c/kg cwt. There were also more heavy crossbred ewes and these made $94-$136.

The NLRS the lamb quality was plainer overall, although there were some very good pens of medium trade and heavy lambs. The regular buyers attended and competition remained consistent.

The NLRS said lamb quality was average in the typical winter yarding. Not all the usual buyers attended or operated fully.

There was keen competition for the better presented trade weight and heavy lambs, which sold firm to a few dollars dearer on last week. Lighter plainer types were a little cheaper. Restocking activity was limited to a few pens of lighter lambs selling from $47-$63. 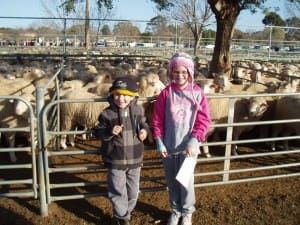 Jobe and Makenzie Clarke enjoyed their time at the Ouyen saleyards on Thursday.

At the Ouyen Livestock Exchange on Thursday, the agents yarded 11,779 lambs and 2370 sheep.

In Queensland at the Warwick saleyards on Wednesday, the agents yarded 1867 lambs and hoggets, and 509 sheep.

The top pen of lambs from WJ and JA Dehnert of ‘May Park’, Chinchilla, sold for $142 to Tony’s Super Meats.

The NLRS said it was a very mixed quality yarding. Store lambs were abundant, with little rain predicted for the coming month. All the usual buyers attended and lamb prices were firm.

At the Northern Tasmanian saleyards on Tuesday, the agents yarded 870 lambs, 730 fewer than last week, and 750 sheep, 100 more.

The NLRS said there were smaller yardings of lambs at Powranna and Killafaddy, with only a few light and very light lambs.