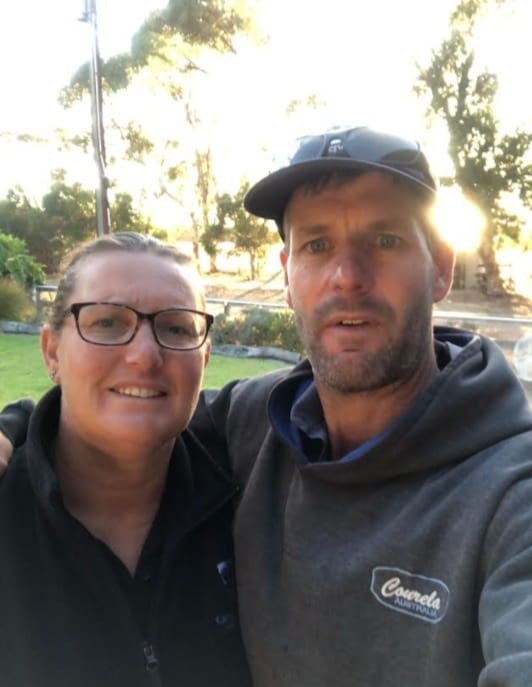 KANGAROO Island farmers producing sheep, wool and potatoes are featured in the latest Virtual Bus Tour by the Society of Precision Agriculture Australia.

The farmers featured in the latest online roadshow are specialist prime lamb producers Rick and Annie Morris, of Karatta, and Peter and Meghan Cooper, of Parndana, who produce seed potatoes, prime lambs and wool.

The Virtual Bus Tour, funded through the Kangaroo Island Landscape Board, was developed to give farmers and other interested landowners access to the stories of these farmers without having to leave home.

On the roadshow, Rick and Annie said have identified their main profit drivers as stocking rate and the number of lambs weaned.

“The broader wool on the ewes is not worth much at the moment, so everything is focused on making sure they ideally have twins,” Rick said.

“We’re up to about 147 percent weaning in the adults and over 100 percent in the ewe lambs.”

Rick said managing Coopworth-based composite ewes was very different to running Merinos and he and Annie have travelled around Australia and overseas to learn more about it.

“We’ve been sourcing the appropriate professionals and visiting the best producers in the business, and we can thank them very much for our recent production gains,” he said.

Peter Cooper said a trial by Primary Industries and Regions SA (PIRSA) opened his eyes to the importance of using data to ensure their farms became more productive yet remained sustainable.

As part of the project run by PIRSA soil consultant Lyn Dohle, Precision Agriculture staff mapped several of the pivot sites where seed potatoes were being grown. A contractor then used the maps to apply variable rate lime over part of the area and no lime on a control section for comparison.

“Then we did some hand digging in the potatoes to see if there was an effect on their growth from the lime,” Peter said. “That was the first of my experiences with variable rate applications.” A 2020 forage crop on the Morris farm showed that paying attention to detail and data pays off.

SPAA president Frank D’Emden said COVID-19 restrictions had made it more difficult – and in some cases impossible – to run popular traditional in-person events such as field days and farm walks.

“We know farmers love nothing better than to visit other farms.

“They enjoy seeing what’s working and what isn’t, and hearing other farmers talk about the lessons they’ve learned,” he said.

“The Virtual Bus Tour aims to capture some of that experience in a format that’s available to anyone with internet access at any time of day or night.”

Frank said the adoption of precision agriculture tools and technologies presented an opportunity for all farmers to make efficiency gains and savings, regardless of whether they were involved with cropping, livestock or horticulture.

As well as hosting the Kangaroo Island stories, the Virtual Bus Tour is being expanded to include ‘stops’ at farms in the Eyre Peninsula, Limestone Coast and Murraylands/Riverland regions.

The Virtual Bus Tour can be viewed at www.spaa.com.au/virtual-bus-tour

This project is supported by the Kangaroo Island Landscape Board with funding from the Australian Government’s National Landcare program.