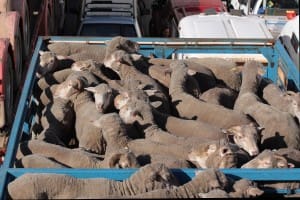 Australian live sheep exports in July were three times higher than the same month last year, with 284,949 head, worth A$35 million FOB, shipped during the month.

For the year-to-July, shipments were 1.39 million head, valued at A$138 million FOB.

Live goat exports during July were up 6pc year-on-year, at 5,556 head, and up 17pc for the January to July period, at 42,845 head. Malaysia received the majority of shipments for the month, at 5367 head, more the twice last year’s level, carrying the figure for first seven months 28pc higher year-on-year, at 37,907 head.

During July, total Australian live cattle exports were 101,602 head – more than double the same time last year and 77pc above the five-year average, with a value of A$85.7 million FOB. Live cattle exports for the January-to-July period were 85pc higher year-on-year, at 731,429 head and were worth A$684 million FOB (Australian Bureau of Statistics).

The largest market in July for live cattle was Indonesia, taking 49,011 head, up 68pc on last year and averaging 50pc above the previous five years, accounting for 48pc of total exports for the month.

Aggregate exports for the first seven months of 2014 to Indonesia also increased, up 93pc year-on-year, at 396,702 head.

The second largest live cattle export market during July was Vietnam, at 21,791 head, up significantly on the previous year, while the first seven months saw exports reach 98,910 head.