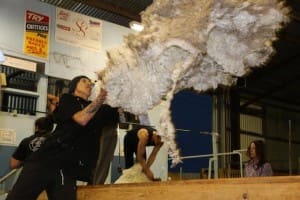 Woolhandling competition legend and inspirational trainer Joanne Kumeroa has died on Thursday in New Zealand after a three-year fight against cancer.

From the Whanganui River area, Kumeroa was 45 and won more world, Golden Shears and New Zealand titles than any other competitor. She was widely regarded as the “David Fagan of woolhandling”.

She won world individual championships in Edinburgh in 2003 and in Toowoomba two years later, when she also won the first of three world teams titles, the others following in Norway in 2008 and Masterton in 2012.

She also won the New Zealand Open Championships final in Te Kuiti six times, in 1992, 1995-96, 2001-02 and 2007, along with dozens of other titles across all categories of woolhandling, including the fine wool of the Merino.

Her last Golden Shears Open final in 2013, when runner-up to new-era champion Joel Henare, was tinged with emotion, taking place in the throes of her cancer treatment in Australia, where she was living, and as she fought to heighten women’s awareness of cancer.

“I didn’t come here for me,” she said at the time. “I’m here for all those other women who may have cancer, and need to do something about it.”

At the same event, new open shearing champion Rowland Smith, who had lost his mother to cancer, donated his $3000 winning purse to the cause, and Joanne returned to Australia immediately afterwards to take part in a Ducks on the Pond cancer awareness shearing fundraiser in the Clunie woolshed near Harrow, Victoria.

Bravest humble Duck on the Pond at Harrow

At Ducks on the Pond, Jo said she couldn’t believe how many people had turned out to help those with cancer.

“The impact has been huge – I absolutely love it.” 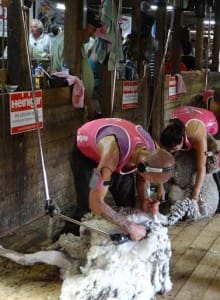 Joanne Kumeroa shears at the Ducks on the Pond event in 2013. Picture Tracey Kruger.

In a testament to her dedication to her industry and the fight against cancer, Joanne admitted she shouldn’t have been shearing at Duck on the Ponds, but took a break from chemotherapy to attend, just seven months after her cancer was confirmed. She said the NZ event raised $11,000, the Australian wool handling team donated $600, the pressers put all their prizemoney in and the womens’ invitation entrants put in $1300.

“And then to come to this and the amount of people is just mind-boggling.

“It makes me want to cry, because I can’t believe people do that for us,” the humbled shearer said.

Joanne also continued to mentor newer woolhandlers, having trained with New Zealand wool harvest training providers Tectra and with Australia Wool Innovation, and was also an accomplished shearer, with best tallies of over 400 in a day.

Mavis Mulllins, a two-times Golden Shears open woolhandling title winner who has become a leading businesswoman and who was president of the Golden Shears International Shearing Championship Society, said: “It’s the passing of a legend.

“She is the woolhandling equivalent of David Fagan.”

“In a lot of ways,” she said emphatically, “she has fought a valiant fight with cancer.” Shearing Sport New Zealand chairman Gavin Rowland said Joanne was a fantastic competitor, ambassador and role model.

“She, as did David Fagan with shearing, set the mark for woolhandling,” he said.

“Also she has inspired and trained a lot of the younger woolhandlers.”

Among them was Henare, who on Saturday after adding another New Zealand Open title to his third Golden Shears title won last month, said: “This is another one for you Jo.”

“She was just a true champion, she is a legend.”

On the Southern Shearing Facebook page Teresa said: “You changed us to be better. You bring out the best in us. You gave us your precious time!! Your presence is felt in every moment you speak. We feel your passion for wool as it makes us want to thrive for more because we love it as much as you do. You see us all as the same and you just teach with your wisdom and phenomenal skills.
We love you Jo, and each day we walk into a shed across the world we will be thinking of you and all that you have given to our industry. The heavens have their angel. Rest peacefully beautiful lady.”

Ararat-based wool handler and trainer Sarah Moran said Joanne commenced working with SCAA Shearer Woolhandler Training Inc. as a wool handler trainer in 2011 and was highly regarded by her peers and students.

“Her knowledge and skills in the industry were world-class.

“She was passionate about the industry and this shone through in everything she did.”

Sarah said Jo was always more than happy to share information to all who asked for help.

“She loved imparting her knowledge and loved seeing the young or new competitors coming up through the ranks,” Sarah said.

“She is very much respected throughout the wool handling competitions all over the world.”

Sarah said the most inspirational time she saw Jo compete was at Warrnambool Show last year.

“Due to her illness, Jo had very poor circulation, therefore each time she competed her fingers would become numb.

“When she came back to the crowd, one of our shearing instructors would have prepared a hot water bottle for her, to try to get some warmth back into her fingers,” Sarah said.

“The pain was immense, but she never complained and would continue on to the next round.

“The fact that she went on to win under such circumstances was truly remarkable.”

A proud supportive mentor to even her opponents

Sarah said if Jo was at a show that she was competing in, she was always so supportive.

“She would try to stand as close to my work area as possible and encourage me with words of support.

“She had a way of making you feel confident in your ability and she was always so proud of everyone she mentored.”

Sarah said she was lucky enough to be a part of the ‘Ducks on the Pond’ event held at Clunie, near Harrow.

“This cancer fundraiser was made ever so much more of a special event with Jo there.

“Her guts and determination was so evident as she shore all day, even though she was very sick due to her chemo treatment,” Sarah said.

“It was so very touching the way she made a concerted effort to personally chat with, and thank every single participant of the event.

“Jo’s passion for the industry didn’t just stop with her skills and ability, and desire to improve other industry workers,” she said.

Sarah said Jo would support the industry by regularly buying woollen items for herself and as gifts for others.

“Having left school at a young age to work in the industry, Jo didn’t consider herself very academic.

“One of her last legacies was the production of a colour coded labelling/learning tool for in-shed use to help people with low literacy levels; she was always thinking of others.”

Joanne touched so many people with her kindness, generosity and passion, Sarah said.

“She will be sadly missed by all who knew her, but her legacy lives on from the influence she has had on our organisation, and the wool industry as a whole.”

Joanne Kumeroa was based for several years in Hamilton, Victoria, and returned home to New Zealand just weeks before she died.