Is wool’s price-demand slump due to grower politics or high prices? 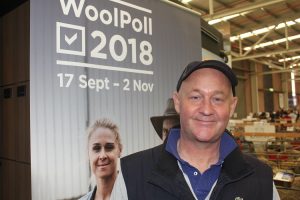 AUSTRALIAN Wool Innovation chief executive Stuart McCullough’s claim that grower bodies arguing for a lower industry levy was partially responsible for the recent decline in wool prices have been rejected by growers, brokers and analysts.

“I think some damage to the brand wool has already been done and prices are showing that already, with a few other issues that have happened.

“I think there has been a huge amount of damage with the agri-political groups – WoolProducers and Australian Wool Growers Association — they’re pushing this signal out there that it is time to reduce investment in marketing and R&D; I think that’s done damage to brand wool,” he said.

“And you think that’s responsible for the price drop that’s currently being experienced?” Mr Long asked.

“I think that’s playing a part, absolutely playing a part, I haven’t seen a drop like this, some 300 cents, in a hell of a long time, in fact maybe in my lifetime in the wool industry,” Mr McCullough responded.

Mr McCullough and his chairman have been lauding AWI marketing’s role in driving wool prices, and the AWI CEO then stood by his recent comments that wool prices “can only go up”. He also mentioned recent letters from international processors supporting AWI’s marketing and his concern about the China-US trade war.

Mr Long asked: “So I just want to be clear here, when the price is going up, AWI is the reason for it, and when it is going down, it’s the other wool growing organisations in Australia’s fault?

“What we’ve had for eight years, while we’ve been expediting our marketing projects in the Northern Hemisphere has increased and sustained growth of wool prices, to the point of 2100 cents,” Mr McCullough said.

“Something has changed in the last couple of months, in the last month for that matter, it looks peculiar to me.

“It’s very hard as you know with wool prices to pinpoint it to one thing, but I think it is clear that some brand damage has been done to brand wool.”

Ms Hall told Sheep Central that WPA, in seeking a 1.5 percent wool levy, based on AWI’s own figures, was not calling for a cut in AWI’s marketing expenditure.

“Because based on AWI’s figures in the WoolPoll voter information memorandum a 1.5pc levy produces the same amount of revenue as it had received in the last few years.

“If our overseas customers are getting spooked by any talk of a reduction in marketing that is from AWI misconstruing our message.”

“It is just as likely that AWI’s low-ball forecasts (in the WoolPoll VIM and 2017-18 annual report) of future revenue and future wool prices have done the same thing.”

“It’s market-driven supply and demand — I don’t think the chatter about the levy has had any influence on anything else and it could be just as much that AWI themselves is forecasting that the wool price will go down.”

AWGA chairman Robert McBride also rejected Mr McCullough’s comments. In a tongue-in-cheek response, the wool grower said AWGA also apologised for “climate change, the sinking of the Titanic, the First World War and Attila the Hun not being such a nice guy back then too — all these things we take full responsibility for.”

National Council of Wool Selling Brokers of Australia John Colley and leading market analyst Chris Wilcox said they had received no feedback that the WoolPoll levy debate had affected market demand or prices.

Mr McCullough’s statements also seem to conflict with the most recent AWI market report from trade consultant Scott Carmody. Mr Carmody said the most popular reflection for the 96-cent drop in the AWEX Eastern Market Indicator to 1874c/kg clean last week — the largest weekly drop in the EMI since 2003 — “was the simple fact that exporters to China were experiencing very limited inquiry for new business and any new forward contracts were extremely hard, if not impossible, to come by.”

“Some pre-sale discounting in forward levels being offered into China were being reported and this provided the inevitable feeble lead in to the start of auctions,” he said.

“From the other side of the industry, information from manufacturers is that the prevailing high prices of the past months has proven problematical to pass on through to retail.

“As the price moved so swiftly upward through the course of last season (up over 500 cents), the manufacturers were able to use a two to three-month average (length of supply chain) price to sell out the other end, so the top of the market price was no gauge as to the ability of the current price of wool being able to move all the way through to consumer,” he said.

Mr Wilcox said it must be remembered that wool prices have come back in the last three weeks, but they had also increased in May and June this year.

“So all we’ve done is go back (in terms of the AWEX Eastern Market Indicator) to where we were in May, pretty much, except for the superfine end, they are down a bit more.”

Mr Wilcox said the price increases were more driven by supply concerns and now issues on the demand-side were starting to come through a bit more.

“I think particularly in China, the Chinese economy, the economic growth in China last quarter was the slowest we’ve seen since the Global Financial Crisis.

“That’s having a knock-on effect on consumer confidence in China, which has come back, and talking to some people who have just got back from China recently, the mills are seeing a slow-down in the domestic side of their business and they are becoming cautious about buying.”

He has had no feedback that Australian wool politics or discussion around a lower AWI wool levy was having a negative impact on wool prices.

“I don’t think the Chinese are focusing on those others issues from what I understand.

“It’s certainly not in the feedback that I’ve got,” he said.

He said any reduction in wool marketing might be an issue in the long-term, but immediately it was about market dynamics.

“Apparently their exports aren’t going too badly, but the domestic side is their issue.”

Mr Wilcox said higher wool prices had led to the inevitable substitution by some processors of wool with other fibres.

“Some of the higher-priced garments and products, the brands, they don’t enjoy the higher prices for wool, but they can cope with it; their margins just get squeezed a bit, but it is more some of these mid-priced products that are seeing some substitution.”

He said the industry also had to recognise that production of wool 18.5 microns and finer has increased this year, with a lot of hunger-fine wool of lower specifications.

“The combination inevitably would mean there is some weakness in those prices as well.”

Mr Colley said the reality of the current wool market is “probably the wool price got too high and couldn’t be passed down the pipeline.”

“The second thing is that there is an enormous amount of drought-affected wool coming onto the market out of New South Wales and Queensland with quantities of fine micron wool that nobody had predicted.”

“Then there is obviously the nervousness and confidence levels, in that everyone is unsure about what the China-US trade war actually really means for the wool industry,” he said.

“Lots of people throw darts on the board, but the reality is that we must remember that China is a Communist country and if Beijing says that ‘Australia is an ally of US, we don’t want you to buy wool or we want you to reduce your support’, they will.

“It’s not a real price rise until the price is passed all the way down to the consumer in a finished garment, and that’s still a work in progress.

“It takes up to two years for the price to actually consolidate; people eat into their margins to maintain market share so until there comes a financial equation that doesn’t work for someone in the pipeline, the price doesn’t change.”

He said in his conversations with Italian and Chinese wool industry people in the last 24 hours about market conditions and supply, any likely impact of the Australian WoolPoll levy debate wasn’t raised.

“It’s such a long bow, it is just ridiculous to think that WoolProducers and the Australian Wool Growers Association are even partially responsible (for current wool prices), for statements they’ve made in the press about AWI.”

Mecardo principal Robert Herrmann said on 17 August this year the Australian wool market peaked with an Eastern Market Indicator of 2116 c/kg, following Mr McCullough’s announcement January 17 announcement that the market can only go up, it can’t go down.

“I don’t see that as anything sensational, I don’t see it as a disaster or the beginning of the end or anything like that,” he said.

“I think some growers who have been passing in huge amounts of wool in these last two weeks are perhaps putting their finger to the wind.

He said up until last week Australian growers had this season sold 6356 fewer bales per week than in the previous season. The average number of bales sold per week last season was 39,231, the weekly average sold in the 2018-19 season to date has been 33,113, and the year-on-year difference is a 26,000 less or 6356 bales per week.

“If the supply is back by that amount and the market ends up averaging 24pc lower than where it was at the peak at the 17th of August, then that is a serious market correction and it’s why I discount it (AWI’s 1650 cent EMI) – I don’t think that’s possible.

“I think in these circumstance that would be too extreme,” Mr Herrmann said.

“But if I wanted to refer back to Stuart’s comments about the market only going up, I would throw it out the door as ridiculous anyway, because 1650 cents is a long way back from 2100 cents.”

Mr Herrmann said on a practical analysis of the market, a 1650c/kg EMI average for 2018-19 would be “a shock to everybody”. He said the market has steadied today, but the pass-in rate is still in double digits, and last week it was 23.6pc.

“So the market is going to respond to this by selling less wool anyway — if the price is 24pc below where the peak was and we are likely to sell a lot less wool in a much lower price market.”

Mr Herrmann said: “one of the best fixes for high prices is high prices and that’s what we are seeing.”