Is Sara Wilson’s Dorper lamb and hogget ‘logget’ burger the best in the west? 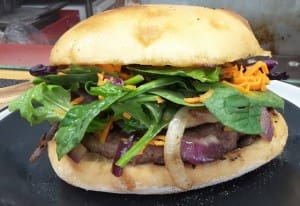 The restaurant owner and Dorper lamb producer believes her lamb and hogget or “logget” burger made with Gimlet Grove Saltbush Dorper lamb from her family’s WA wheatbelt farm is pretty special.

And she is thinking about testing her belief in the state’s Best Burger in the West cook-off launched this week.

The WA Department of Agriculture and Food’s Buy West Eat Best program and Celebrate WA have joined forces with Perth’s burger king Justin Bell from Jus Burgers in the search for the ultimate burger created from Western Australian produce.

Ms Wilson said she needs to find out what is involved in the cook-off. All the burgers in the Outback Kitchen are made from Dorper lamb and hogget, and the restaurant is the only food vendor- member of the Buy West Eat Best program in the Fremantle Markets.

“We source every ingredient locally apart from a few spices and chutneys we get from elsewhere.”

“I reckon we should be going for a lamb burger, it’s out great West Australian dish isn’t it?” she said.

Department of Agriculture and Food executive director Peter Metcalfe said burger tragics of all ages are invited to compete to create the most creative, innovative and delicious hamburger, using ingredients farmed, fished, grown or produced in Western Australia.

Four finalists will be selected to cook-off on-stage at the WA Day celebrations at Elizabeth Quay, Perth on Monday June 6 from 11.30am to 12.30pm.

“With Western Australia’s rich and diverse array of produce, and the coming of age of the humble hamburger, we are expecting to see some highly innovative entries plated up,” Mr Metcalfe said.

Entries can be submitted via Buy West Eat Best’s Facebook page, from which the finalists will be selected by Justin based on flair, innovation, use of local ingredients and creativity.

Finalists will receive a mentoring session from Justin Bell to help them perfect their recipes prior to the cook-off.

The finalists will have one hour to prepare and present their dishes to a judging panel including well-known food critic Rob Broadfield and Rob Nixon from the popular Nicko’s Kitchen blog.

Master of Ceremonies for the day will be food identity Scott Taylor, who is behind some of Perth’s most iconic eateries such as The Beaufort St Merchant, The Trustee Bar and Bistro, Enrique’s School for Bullfighting, Angel’s Cut and The Shorehouse.

Celebrate WA Chief Executive Officer Kevin MacDonald said the ‘Best Burger in the West’ cook-off will be a fun event for the whole family as part of the WA Day Festival.

The winner will enjoy a meal for four at JusBurgers, $500 cash and the winning dish will take pride of place on the JusBurgers menu.