Merino wool growers who mules with pain relief or don’t mules, on average have lower pass-in rates than others. Image – AWEX.

WOOL from Australian sheep mulesed without pain relief is more likely to be passed-in under grower auction reserves than fleece from animals treated more humanely or not mulesed, AWEX data shows.

SustainaWOOL program manager Dr Paul Swan has used AWEX National Wool Declaration data to show that wool from non-mulesed sheep and to a lesser extent, fleece from those mulesed with pain relief, is less likely to passed-in at its first offering at auction.

And the first-offer passed-in rate of wool mulesed without pain relief or not declared on the NWD is growing, and has more than doubled since 2016, while its difference to the lower rates for non-mulesed and mulesed-pain relief wool is getting wider.

“My view is that there is not an argument about whether there is substantial and broad-based demand for non-mulesed or ethically assured wool.

“The data does the talking,” Dr Swan said.

“What the analysis shows over the past four years is that there has been a significant difference in the passed-in rate between different fleece wool categories on the NWD.

“And what it shows is that if you don’t declare on the NWD or if you are mulesing without pain relief, you are much more likely to be offered a below-reserve price for your wool at auction,” he said. 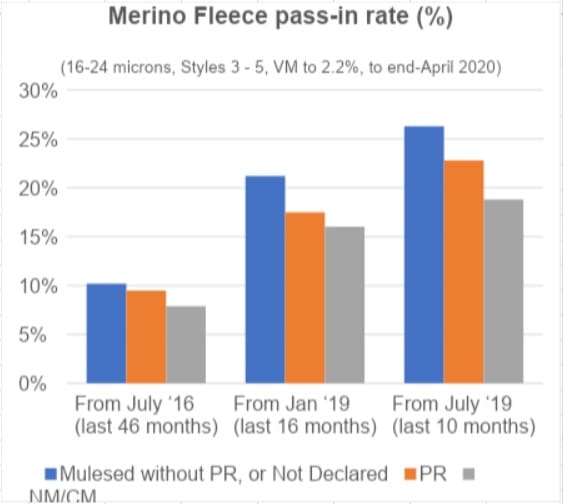 In the May SustainaWOOL newsletter, Dr Swan said these trends are real and are getting stronger.

“Putting it bluntly, you are much more likely to be offered an unacceptable wool price at auction if you do not use the NWD to declare your clip, or if you don’t use pain relief when mulesing your sheep,” he said.

Dr Swan told Sheep Central that because of the nature of Australia’s free market and because wool is a very storable commodity, any wool that doesn’t sell on auction day goes back into storage at the grower’s or broker’s cost, to be re-offered later.

“That wool has got to make its way back out onto the auction floor to be sold again and what this is going to do is exacerbate the price trends.

“To me this shouldn’t be a political debate, the evidence is abundantly clear in the auction data,” he said.

Dr Swan said growers who mules without pain relief or who are not prepared to declare what they do, are increasingly unable to sell their wool for prices that other growers are offered.

“And so they are in a sense, it is arguable, reducing the value of the national clip.

“While some like to say that every bale of wool sells – the key thing is at what price?” he asked.

“And if we are building an increasing stockpile of wool that is of a type that the wool market is showing that it values less than other types, that is going to make its way out onto the market to be sold at some point and it will exacerbate the price trends.”

Dr Swan said there are implications in the passed-in trend for wool categories.

“The trends are getting stronger, the differences are significant, and there are implications for our future.”

Dr Swan said the Australian industry does not report wool stocks, but in the May SustainaWOOL newsletter he said unsold stocks have rapidly risen this year.

“The thing I flag is that if you look at the differences in the passed-in rates (for wool categories), for every 100 bales that doesn’t sell, there are an extra five, six or seven that are going into the stockpile that are of this non-declared or no pain relief type, and that adds up.”

Dr Swan said essentially, wool that doesn’t sell in a given sale week doesn’t directly contribute to the AWEX Eastern Market Indicator reported for that week, since the EMI is sort of a weighted average selling price of a standard basket of wool types. See (http://www.awex.com.au/market-information/awex-wool-market-indicators/).

“So, wool that doesn’t get sold doesn’t contributed to the average sale price, and thus the higher passed-in rate for non-declared wool doesn’t affect the EMI per se.

“However, to the extent that growers are forced to lower their price expectations in order to sell wool post the auction, or when re-offering at auction, future values of the EMI could be impacted,” he said.

Data from a major broker released to Sheep Central showed that almost 40pc of the previously offered wool in storage was not declared via the NWD on a wool speci, possibility indicating it could have come sheep for that had been mulesed without pain relief. The percentage of bales stored relative to NWD status were ND 37.24pc, PR 29.26pc, NM 26.47pc and CM 7.03pc.

The April statistics for the National Wool Declaration recently released by AWEX highlight the increasing growth in Ceased Mulesed, Non-Mulesed and PR (mulesed with pain relief) declarations within total NWD use. In a recent newsletter, National Council of Wool Selling Brokers of Australia executive director Chris Wilcox said although the total number of bales of first-hand grower clip wool fell by 26pc in April compared with April 2019, the percentage decline in the number of bales declared as Pain Relief (PR) and Ceased Mulesed (CM) was each smaller than the decline in the total number of bales.

“As a result, the proportion of CM, NM and PR-declared wool combined was at just over 55pc of all first-hand grower wool offered at auction.

In a recent Mecardo analysis of premiums NM and CM Merino wool, consultant Andrew Woods said that NWD classifications will affect wool price if teamed up with certain combinations of fibre attributes and mulesing status tends to be conditional in its effect on price.

“The presence of quality scheme accreditation can extend the range of wool for which premiums for CM-NM status are paid.

“While premiums have increased notably in recent seasons, they are still conditional upon other attributes of the wool being offered for sale,” he said.