AN IRISH shearer who made New Zealand his shearing season home has broken a NZ shearer’s world record by just one lamb — supported by a band of Kiwi helpers.

But 35-year-old Ivan Scott, 35, from Kilmacrennan, County Donegal, needed almost every second of his nine hours on the shearing board at Trefranck Farm, near Launceston, Cornwall. He beat the previous record by just one lamb with a new mark of 867 for strongwool lambs – averaging 37.37 seconds a lamb or 96.33 lambs every hour.

It was the first attempt on the ultimate lamb shearing record by anyone other than a New Zealander, and beat the previous record of 866 set in a King Country woolshed in the central North Island of New Zealand on January 10, 2007 by then-reigning Golden Shears champion and Hawke’s Bay hearer Dion King, who now farms and shearers near Masterton.

It has been far from an easy few days for the lanky Scott, whose bid was delayed for two days because of rain before three World Shearing Records Society judges, from New Zealand, Australia, and Wales, gave the go-ahead on Saturday afternoon. A sample shear of 20 of the Romney and crossbred lambs was held to ensure the lambs had an average of at least 0.9kg of wool required by the rules. The average achieved was 0.966kg.

Starting off with 193 in two hours from 5am to the hour-long breakfast break, Scott was three behind King’s tally of 196 at the same stage. Despite having three lambs rejected during the morning on quality grounds, Scott maintained an average time per lamb marginally ahead of that needed to break the record. He then had successive tallies of 170, 169, and 169 in the 1 hour 45 minutes runs before going into the last run needing 166 to break the record. While tiring but still determined and focused, he passed the old mark with just before the 5pm finish, and had a last-run tally of 166.

While a top shearer in competition, with nine All-Ireland Championships and a 2014 New Zealand Corriedale Championship to his name, Scott has become better known internationally through a succession of tally records.

In December 2008, when based in Rolleston, near Christchurch, he set an eight-hour record of 736 at Rerewhakaaitu, south of Rotorua, and after seeing that broken in January 2011 by 2010 world and Golden Shears champion Cam Ferguson, reclaimed the record with 744 shorn at Opepe Trust Farm, near Taupo, in January 2012.

At the start of April this year he shore a single sheep in 37.9 seconds, in a successful live-televised Guinness Book of Records record attempt, and on June 18 year he set an Irish record of 820 ewes in nine hours near Ballinrobe, Co Mayo, showing he was on target for his big world record challenge.

But neither that nor today’s record was his biggest tally. He once shore 878 in nine hours at work, in New Zealand, without judges or the pressure of shearing alone in front of a crowd.

Having worked in New Zealand most summers since 2000, Scott has been employed mainly by Rotorua contractor Jeff Dorset, who flew to the UK to manage the record bid. 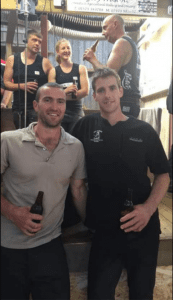 Scott was supported in his attempt by England-based New Zealand shearer Matt Smith who on Tuesday set a world ewe shearing record at Trefranck, the farm he runs with wife Pippa. Also helping were Smith’s brothers world champion Rowland and Doug, both also record holders, and Australia-based New Zealander and Merino record holder Cartwright Terry. The woolhandler was Helga Sinclair, from Scotland.

With the record out of the way, Scott will now start preparing for the 40th anniversary World shearing and woolhandling championships being held in Invercargill, New Zealand, on February 9-11 next year.

He was seventh at the last world championships in Ireland two years ago, missing a place in the final for the first time by just 0.258pts.