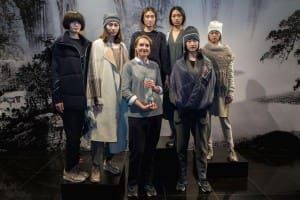 New York-based designer Marcia Patmos has won the 2015 women’s International Woolmark Prize with a collection described as using Merino wool to make elegant clothes that were also “young in spirit.”

IWP co-judge, fashion commentator and journalist Colin McDowell made the comment at the awards event in Beijing China last night.

“I thought that it was a very sophisticated collection which used Merino wool to make clothes that were elegant but also young in spirit,” he said.

“I am looking forward to seeing what happens as a result of this new opportunity.”

She received a cash prize of AU$100,000 (US$76,366) and the opportunity for her designs to be stocked in retailers such as Saks Fifth Avenue, Harvey Nichols , 10 Corso Como, JOYCE, Isetan Mitsukoshi, David Jones and mytheresa.com The M.PATMOS collection will be available in partner retailers globally from August 2015.

Australian Wool Innovation said after a global search reaching across 21 countries and involving more than 60 designers, M.PATMOS competed against four other selected design talents from around the world in the competition, including VMAJOR from China, STRATEAS.CARLUCCI from Australia, AUGUSTIN TEBOUL from Germany and Bird on a Wire from Lebanon. 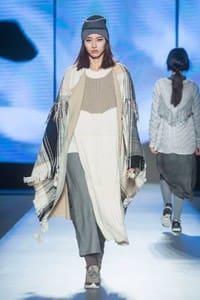 Another M.PATMOS creation is modelled on the awards event runway in Beijing. Photo: Victor Chang

“I am really excited to be here in Beijing to be part of this event.

“I felt that Patmos embodied best what the IWP stands for,” she said.

“The collection was well-executed and the concept interesting.”

“Connecting the world’s leading fashion designers with Australian Merino wool is extremely important due to the enormous influence these designers have in setting global textile trends for mainstream retail brands,” the release said.

Last year’s winner Rahul Mishra said the International Woolmark Prize provided him with the opportunity to explore ways of working with wool he had never dreamed were possible.

“The winning collection sold out around the globe with many partner boutiques re-ordering stock.

“My most recent collection is entirely 100 per cent Merino wool, it is the perfect fibre for me to realise my creative vision,” he said.