The season’s highs were, in fact, bid in reverse to normal practice with the best of 2019 drop ewe lambs topping the market at $374 a head, the best of the one year-old lots fetching $370 and the normally preferred 1.5 year-olds making $364.

All were considered Victorian-state records, although the best ever 1.5 year-olds have previously made higher, selling to $384 a head at Naracoorte 12 months ago.

The yarding of about 20,000 was offered in outstanding order considering the difficulties of the season.

McKean McGregor auctioneer Alex Collins said agents were also blown away by the size of crowd that attended and the depth of the competition they brought.

“This sale has created its own reputation over many years.

“And when you gather large numbers of well-bred stock together you do expect buyers to travel in good numbers with the intention of competing, but today that competition rose to a new level,” he said.

“Lambs prices are good, mutton prices are good and combined with that the size of crowd and their desire for quality stock has delivered one of the most exceptional results ever seen.” Linda Cartwright and her sons Hugh and Ned, with the special award in the memory of her late husband James.

When opening the sale, McKean McGregor principal Glenn Rae announced the sale principal sponsor, Rural Bank, had decide to offer an annual award to commemorate the unfortunate passing of James Cartwright, a leading local breeder and supplier to this sale who loss his life during the year in a tragic on-farm accident.

The winner of the award would be judged by the buying gallery and awarded to the vendor of the highest priced lot sold in the grown young ewe section.

The award this year won by James’ family, his wife Linda Cartwright and his sons Hugh and Ned of Raywood with their one year-old line of Sept/Oct 2018 drop September shorn Gudair-vaccinated and mulesed first cross ewes, bred by the family’s own Bungaree Border Leicester rams.

The line of 175 was purchased for $370 by Ballarat agent, TB White & Sons, while an older draft of the Cartwright family’s April/May 18-drop BLM (1.5yo) young ewes, sold as the opening pen of the sale, went to the same agency for $354. 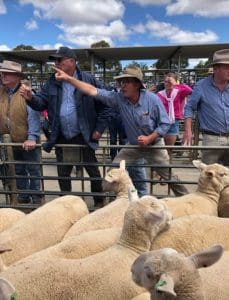 Alex Collins said surprisingly very few lots from the 2018 drop yarding made less than $270 a head.

A & DR Collins and Partners, Bridgewater, pen of 186 April/May drop lambs, October shorn by Blackgate BL rams stood proudly as the first pen to be offered in the 2019-drop ewe lamb yarding.

However, the best priced and the ultimate high for the entire market was cleared at a breath-taking $374. This was paid for 400 ewes from Geoff and Di Allan “Melrose” Mathoura, NSW while a second draft of the Melrose drop – a pen of 360 made $344.

Such was the sustained strength of the competition and the quality of the yarding that almost all sales within the first four lanes of the Bendigo selling pens fetched prices above $300.

These were lambs that were of suitable size, condition and maturity for an immediate joining while pens capable of a later autumn joining drew bids beyond $280.

An example of this was the AK Collins P/L, Bridgewater draft of 436, April/May 19 drop, October shorn, Gudair vaccinated and mulesed ewe lambs, ex-Riverina ewes by Blackgate Rams, that made to $334, and returned the outstanding average of $318 a head over three drafted lots.\ Di and Geoff Allan, Mathoura, NSW, with their sale-topping line of Melrose ewe lambs that made $374

Backgrounder buyers were also equally as keen as many third and fourth draft lots drew bids from $220 to $270 a head, with only a small handful sold for less than $200.

FP Nevins auctioneer, Luke Nevins described the market as the best he had been involved in.

“A line has been drawn in the sand” Mr Nevins said.

“I wouldn’t call it panic buying as bidding appeared were very measured and very consistent throughout the entire day” he said.

“There was large crowd, much larger than was expected however the buying area represented was broader than normal”.

The relaxing of the South Australian OJD requirements has added an extra dimension to the buying demand, Mr Collins said.

“We’ve seen it in other recent sales whereby South Australia interests are trying to fill some orders before their main selling is conducted,” he said.