AUSTRALIA’S 2020-21 wool production forecast has been revised upward to 290 millions kilograms, although the number of sheep shorn is forecast to fall by 4.5 percent to 65.5 million.

The Australian Wool Production Forecasting Committee’s fourth 2020-21 forecast is a 2.1 percent increase on the estimate of 284 mkg greasy in 2019/20.

The committee today said most wool-growing regions are experiencing a favourable season and sheep are in good condition. Western Australia, the pastoral region of South Australia and Queensland have reaped the benefit of recent widespread, albeit patchy, rainfall which has replenished on-farm water stocks.

Committee chairman, Russell Pattinson, said on the back of good seasonal conditions, wool producers intend to re-build their ewe numbers in many key wool-producing regions by retaining more replacement and older ewes than normal. 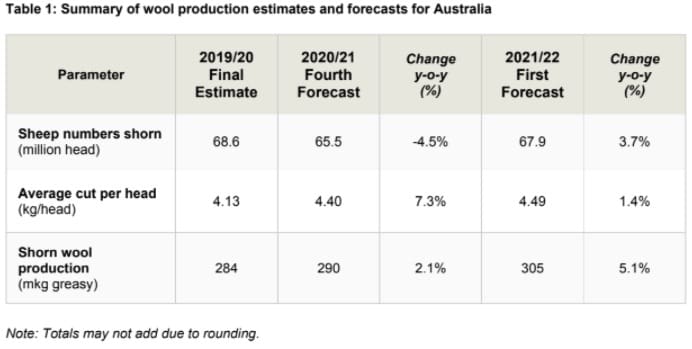 Average wool cut is forecast to lift to 4.43kg

The average wool cut per head is forecast by the committee to increase by 7.2pc nationally to 4.43 kg greasy for the 2020/21 season.

There has also been an increase in mean fibre diameter to 20.8 micron, up 0.2 micron, and average staple strength has risen 1.5 N/ktex to 33.8 N/ktex.

Shorn wool production to increase in most states 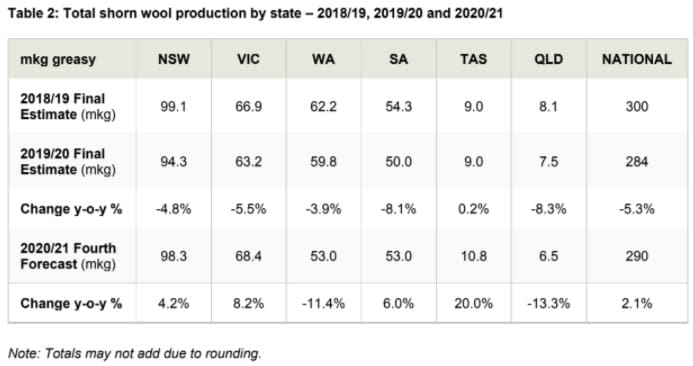 The committee said shorn wool production is forecast to fall in both Queensland (down 12.8pc) and Western Australia (down 11.3pc) as these two states continued to experience relatively dry conditions. However, recent welcome rainfall from tropical cyclones has improved on-farm water availability and will improve the quantity of available paddock feed in both these states. Shorn wool production in all other states is forecast to increase, Tasmania (up 20pc, Victoria (up 8.2pc), South Australia (up 6pc) and New South Wales (up 4.3pc).

The committee said AWTA wool test volumes to the end of March 2021 were down by 0.9pc year-on-year; however, there has been a sharp increase in AWTA wool testing volumes from February to April. First-hand offered wool at auction to the end of week 44 was up 12.1pc. The increase is partly due to the upward movement in wool prices evident in recent months as producers liquidate wool stocks, the committee said.

The committee expects that the current low sheep numbers will restrict larger increases in shorn wool production in the short term despite the favourable seasonal conditions across many wool producing regions of the country.