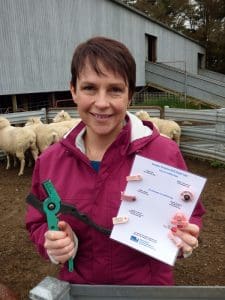 SHEEP ear tag suppliers have concerns about the Victorian Government’s ability to ensure prices are equitably cost neutral in the lead-up to the mandatory electronic identification of stock born after January 1 2017.

Minister for Agriculture Jaala Pulford has negotiated with the Victorian Farmers Federation that the price of electronic tags to farmers in the first year will be “cost neutral” – around the same price as visual tags at about 40 cents each.

However, the subsidised tag prices through Agriculture Victoria’s online service currently range from 77 cents to around $1.50.

Tag suppliers believe it needs to be clarified as to how the range of different tag prices could be equalised by the government down to about 40 cents and how many tags might be needed.

If the same 37-40 cent price cut was applied to all the tags currently sold online, it might mean only one or a few tags would be available at the “cost neutral” price. Alternatively, reducing the cost of all tags back to a visual tag price for the first year might also undermine the market advantage of the lower price tags sold via the online service.

It is estimated 12-14 million lambs would be born in Victoria next year, but if producers ordered extra electronic tags for older sheep, the demand could be more than tag suppliers could manufacture in the short term. When EID cattle tagging was made mandatory there were tag shortages which held up the sale of cattle.

A spokesman for Ms Pulford said there were on-going discussions with the industry to deliver cost neutral tags in the first year. This issue of differing electronic tag prices will be one of the many discussed over the next 4-5 weeks, he said.

Agriculture Victoria is also having discussions with tag suppliers to confirm that supplies will meet the expected demand. The Minister’s Sheep and Goat Identification Advisory Committee will also provide advice on tags to ensure an appropriate outcome, the spokesman said.

Victoria will ask other state governments to participate in a national tender for electronic sheep and goat tags in November this year to continue to ensure competitively tag prices for Victorian sheep and goat producers.

Agriculture Victoria already retails the cheapest electronic NLIS tags in Australia, thanks to this competitive tendering approach, the spokesman said.

“Increased demand for tags is likely to drive the prices of approved electronic sheep tags even lower.

“The minister will invite other states to join that tender as part of the process.”

The spokesman said no formal advice had been received from other states in reaction to the Victorian Government decision to require all sheep and goats born after January 1 to be electronically tagged.

The spokesman said Agriculture Victoria is not considering allowing farmers in other states to buy tags from the Victorian online service at an unsubsidised price.