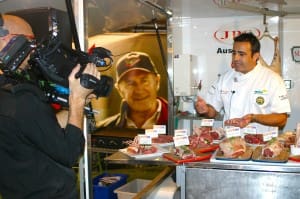 A range of new value-added forequarter cuts are spearheading Meat & Livestock Australia’s drive to “bring sexy back to lamb” in the domestic market.

Lamb accounts for a 13pc value share of Australia’s retail meat spend, roughly on par with pork but well behind chicken (around 30pc) and beef (around 38pc).

At the recent Lambex conference in Adelaide MLA’s Australian Regional Manager Lachlan Bowtell and  State Program Manager for WA Rafael Ramirez described how far domestic lamb marketing has come since the early 1990s, when trade lamb carcases weighed just 16-18kg, lamb was typically sold in sides at budget prices of 99c/kg and the catch cry was ‘stack it high and watch it fly’.

Market research at the time was telling the industry that consumers thought lamb was fatty and full of bone, that they not want to buy big portions and did not know what to do with it, other than the favoured lamb roast.

Since then the industry has been on a 20-year consumer research-led journey to make lamb easier for consumers, and to demonstrate that lamb can provide high eating quality but in versatile and convenient ways.

An early manifestation of the new approach to lamb marketing came with the launch of the Trim Lamb campaign in the early 1990s, which comprised a range of strategies from butcher training to television ads. Remember the butcher trying to convince housewives through his shop window, and finally a Border Collie dog, that the trim meat on display was actually boneless lamb?

Mr Bowtell told Lambex that lamb holds a special place in the hearts of Australians as a favoured protein with a sweetness of flavour and as the “meat that brings the family together”. 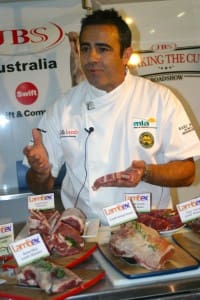 However most consumers still eat lamb less than once a week, with the perceived high retail price of lamb compared to other meats causing some consumer push-back.

Mr Bowtell said lamb offered many price points, with some great products available around the $10-$15 per kilo price point as well as the more expensive cuts.

The MLA representatives both explained at Lambex how innovative approaches to value-adding forequarter cuts into new products such as Banjo shoulder  roast and Spanish racks are helping to sell more lamb into mid-range price points and to encourage consumers to eat lamb during the week, not just on Sundays for the family roast.

Banjo roasts are prepared from a bone in  shoulder while Spanish racks make use of forequarter racks that would traditionally have been cut into chops.

“We used to want four back legs. Now we think we need to have four front legs.”

The popularity of the value-added products was helping to move more cuts that have traditionally been harder to sell.

“The only problem with this product there is only two of them,” Mr Bowtell said, referring to forequarter Banjo roasts.

“We used to want four back legs. Now we think we need to have four front legs.”

MLA has also recently launched a free mobile app that gives consumers access to lamb recipes and information on how to handle, cook and store lamb.