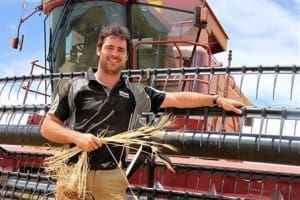 JAMES Coatsworth will miss any sheep or cropping work on the family farm over the next month, but the young footballer and electrician from Wycheproof will still be working for a good cause.

At about 9am today he set off on a 3700km bike ride to Cape York to raise money for Type 1 diabetes (T1D) research and give a little back to those even less fortunate than he.

His ‘Top to Tip’ ride will start at the top of Mt Wycheproof, the world’s smallest registered mountain at 148 metres above sea level, or 43 metres above the surrounding plains, and will end at the tip of Cape York in far north Queensland in about a month.

“I’ve got to deal with altitude sickness before I leave,” James joked.

By mid-morning James was leading a peloton of community supporters, aunties and uncles in cars, with a few towing vans, heading for a sausage sizzle in Swan Hill.

It has been a difficult season at Wycheproof and James’ sister Gina said he took one last look at the farm’s crops before “crossing his fingers” and hitting the road.

James’ mission to raise funds and awareness about T1D will mean about 150km of riding per day for 25-30 days, coinciding with National Diabetes Week July 13-19. He was unexpectedly diagnosed with T1D 18 months ago at age 30, meaning he is unable to produce or effectively use the natural hormone insulin to regulate his blood glucose level. The condition affects more than 122,000 Australians and an estimated 9 percent of people 18 years and over worldwide. Sufferers must take insulin daily, check their blood sugar levels several times a day, get regular physical activity, eat a healthy, balanced diet and stick to a diabetes meal plan.

After departing Wycheproof, James plans to ride through Swan Hill in Victoria, Moulamein, Hay, Goolgowi, Hillston, Cobar and Bourke in NSW, and then into Queensland through Cunnamulla, Charlesville, Tambo, Blackall, Charters Towers, Townsville, Ingham, Cardwell, Tully, Innisfail, Millaa Millaa, Atherton and Mareeba, finishing at Bamaga at the tip of the Cape York Peninsula.

James said he wanted to do something for those who have had the condition all their lives.

“I think the main reason is that I’ve lived life for 30 years without diabetes and felt sorry for the people who get diagnosed in early childhood.

“So I just wanted to raise a bit of money and some awareness.”

His team has already raised $40,000-$50,000 toward a goal of $100,000, and he also sponsorship donations of a titanium Hettly bike, a Jayco van, other equipment, fuel, food and accommodation for his ride north.

“We’ve raised about $20,000 for Diabetes Australia, about $10,000 for the Baker IDI Heart and Diabetes Institute and the rest has gone into a bank account.”

James said he was more a football player than a bike rider, but he trained for the Top to Tip ride for six months.

His support team on the ride will be his girlfriend Casey Tonkin, also his nutritionist, who will help prepare his strict meat-vegies and low carb diet, a good mate and driver David Rumbold and masseuse Nadia Bish.