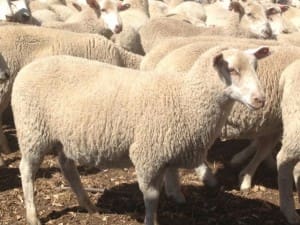 These 3.5-4.5 month-old 18.6kg cwt Primeline lambs at Holbrook sold for $97 through Elders in the AuctionsPlus Xmas Store Lamb Sale on Tuesday.

AuctionsPlus market operations supervisor Anna Adams said there were 90 active bidders throughout the sale and the 71 lots sold at auction went to 42 different purchasers, also from NSW, VIC and SA. 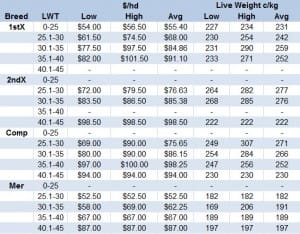 The offering overall was lighter than lambs offered in AuctionsPlus’ Inaugural Farmgate sale in November, with more lambs from 25-35kg liveweight. Composite bred lambs were well-represented and there were fewer Merino lambs.

Carcase weight prices up to 769c/kg 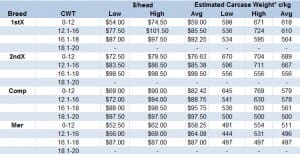 The top price of the sale was $105 for Dorper cross ewe lambs weighing 39kg at Finley, NSW. The more traditional crossbred lamb sold to a top of $101.50 for first crosses at Nyngan, NSW weighing 38kg. The top priced Merinos were Spring-drop lambs also out of Nyngan NSW, unshorn and weighing 44kg live, sold for $87. 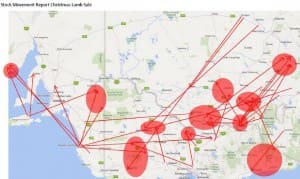 Lambs sold back into southern and central eastern NSW, south-west and eastern Victoria and South Australia, with Elders Holbrook livestock manager Tim Wright believing many orders came after recent rain and because of confidence in forward lamb prices.

His clients offered about 5000 composite lambs and were “extremely happy” with prices $5-$9 over reserves of just under 250c/kg liveweight.

“I think everyone is thinking that the lamb job is going to be pretty good.

“There are some pretty good forward contract prices out there at the moment, so that is probably an indication of where people think it is going to be,” he said.

The sale started at noon on Tuesday, but Mr Wright said when he logged on at 12.10pm, AuctionsPlus already had 71 people logged on.

“That to me is phenomenal, that’s great.”

The Wirruna Poll Hereford operation at Holbrook sold just over 2000 lambs for an $80 average in the sale. The pure Primeline lambs averaged about 34kg liveweight.

“I think it is the best price we’ve received for three years at this time of the year,” principal Ian Locke said.

“It’s certainly a solid result, but the outlook is pretty good.”