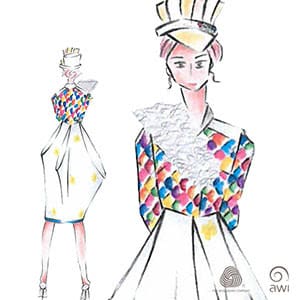 WINNING designs in Australia’s unique Wool4School student design competition will be announced later this month – along with the first overseas winners.

Australian entries will be judged and category winners announced on August 26.

The competition is in its fifth year in Australia as part of the Food and Fibre component of the National Curriculum. More than 9000 Australian secondary students from 700 schools have been involved with the Australian program in 2015.

In the competition’s first foray overseas, student winners in a modified competition in Hong Kong will also be known in coming weeks.

Collaborating with the Hong Kong government’s Education Bureau (HKEB), AWI targeted students from junior and senior schools to Live Life and Love Wool as per the 2015 theme. The partnership with HKEB greatly assisted AWI’s Hong Kong office to promote, liaise and introduce the Wool4School competition into schools across Hong Kong, educating a new generation about the benefits, properties and versatility of Australian wool.

AWI Country Manager for Hong Kong Alex Lai said a number of junior and senior secondary schools across Hong Kong were visited to brief the teachers about the competition and the versatility of the fibre.

“We received very positive feedback from teachers, who also reported that students were excited to learn about the fibre and were amazed that wool is not just a fibre for winter, but a fibre for all seasons.

“We are in the process of organising more workshops tailored to students interested in learning more about Australian wool and its natural benefits.”

Under the theme Live Life, Love Wool, students have been asked to choose either New York City, Sydney, Paris, Moscow or Shanghai and design an outfit – comprising more than 80 percent Australian Merino wool – suitable to the chosen city’s climate. Along with the design illustration, submissions were to also include a mood board and annotations for evaluation.