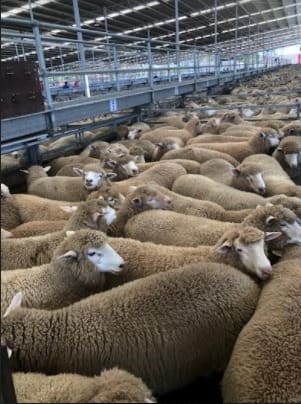 The $324 Foster lambs in Hamilton on Wednesday.

On Wednesday this week, 75 of his Haven Park Poll Dorset-Composite cross lambs set a new record of $324 for new season lambs at the Hamilton saleyards.

The 75 June-drop lambs sold by LMB Linke Land & Livestock to Gathercole for a US order had an estimated carcase weight of 35-36kg, with skins valued at $8. Another 210 Foster lambs sold for $290 to Fletcher International Exports on Wednesday.

But Wednesday’s prices were the last in a progression of high heavy lamb prices realised by the Foster operation as strong American demand for Australia’s heavy lambs continued. 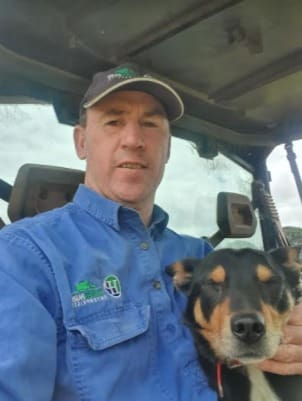 Rick Foster and his Kelpie Dale.

“I think that will probably as good as it gets.”

The strong lamb prices also represent the culmination of the Foster program to produce a superior prime lamb mother, starting with crossing East Friesian rams over foundation Corriedale ewes from the famed Haven Park flock around 1996-97 and then infusing some Border Leicester blood to breed a bigger self-replacing flock.

“It has given us milk and our ewes have got size, they’ve got length and probably more depth.

“We just look at length and hind quarter.”

Mr Foster said he also marketed lighter lambs over the hook this week to avoid heavy lamb penalties, but his heaviest lambs will be marketed at Hamilton next week.

“We reckon our best lambs will probably come in next week.

“It’s good that good producers are getting rewarded at the moment.”

Mr Grant said lamb prices held up well this week despite Hamilton agent’s offering their biggest yarding this Spring of 60,300 lambs, after 54,247 lambs last week. He is expecting 25,000 lambs at Hamilton next Monday and another 60,000 on Wednesday.

“This week 110,000 sheep and lambs went through Hamilton, for there will probably a similar number next week.”

Meat & Livestock Australia’s National Livestock Reporting Service quoted heavy lambs over 26kg as averaging 880-920c/kg cwt, but Mr Grant said not many most of the export lambs have made over 900c/kg.

Mr Grant said he had been an agent for nearly 30 years and he had never seen the heavy lamb carcase weight price hold equal or better to the trade weight rate, but this could correct if more 26-30kg lambs become available next year .

“I have never seen export lambs make more money than trade lambs cents per kilogram – it’s the only time I’ve ever seen it.

“It might alter next year through the Autumn when a lot more shorn lambs come on, but they just can’t find weight at the moment, that’s the biggest problem,” he said.

Mr Grant said local producers north of the Hamilton Highway had to sell their lambs despite recent rains.

He said the store lamb job is “massive” with most good lines making $150-$170 with some pushing 900-1000c/kg cwt. The bulk of local lambs will be marketed over the next week, although there would still be some southern woolly lambs coming on into January.

Mr Grant expected lamb prices to hold through another large turnoff next week.

The NLRS said lambs quality at Hamilton ranged from very good to plain in an offering that did not quite display the overall weight or freshness of last Wednesday, again with more lambs suitable for the paddock. A full field of buyers and restocking competition bid on light weights and new season lambs in a market that was fully firm to $10 softer; however, it was firm to $5 stronger later in the sale over most categories, with the exception of the lambs back to the paddock that eased $5 to $10/head in places.