Bill Nixon, Savernake, NSW, with his Nixon Partners line of ewe lambs sold at $380 at Corowa.

The market toppers were the lead pen of 904 from an annual draft of 1400 young ewes bred and prepared by father and son team of Bill and David Bott at Emu Park, Coreen, New South Wales.

The Bott ewes were sold in unrestricted runs with bidding interfaced with the online AuctionsPlus platform.

Branded with the historic and original number “6” NSW station brand, the first cut of 550 Bott ewes were taken by return buyer Nutrien SGL Leongatha and the remaining 354 were re-offered and bid to $480 by Nutrien BRC Swan Hill.

Bidding by both buyers was conducted from off-site by telephone, with the BRC order completing its buying needs with the purchase of 126 head at $426 selected from a pen of 332 bred and prepared by R.N. & R.J. Harper, Ariah Park, NSW.

The remainder of the Harper line was then sold for $420 to Elders Bendigo bidding on AuctionsPlus.

A further line of 430 young ewes from the Bott family line-bred from Alma blood ewes by Talagi Border Leicester rams, made $400 and went to J.M. Ellis & Co at Hamilton in Victoria, another repeat buyer of several years.

Watch the opening pens of the sale: 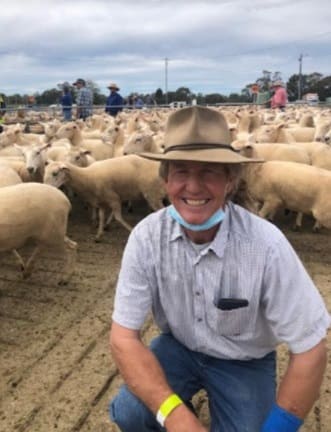 Most of the sheep were offered with good weights ranging from 65 to 79kg, while lots with lighter weights generally made $330 to $380.

Many of the aforementioned sheep were also Spring shorn and aged 15-18 months-old (Autumn 2020 drop), while another well-bred Spring shorn and drop line offered by J.W. Boyd, Brocklesby, made $440 to a return buyer from north of Bendigo.

In a post-sale interview with Sheep Central, Richard Wynne, Nutrien Paull & Scollard said his initial thoughts were that, with the exception of selected lots that had repeat buyer support, most vendors may have viewed the results as being $30-$40 a head below expectations.

“As agents we weren’t expecting the same of results as those earlier sales in the Riverina when prices were pitched mostly in the $450 to $500 bracket,” Mr Wynne said.

“Most of our buyers have yet to sell to their suckers or their cull ewes so they are operating more in the dark compared to those who have” he said.

A greater number of this season’s drop of young ewe lambs were penned and met with solid interest especially for the more mature and better grown lots.

Nixon Partners’ Bill and Adrian Nixon of Savernake, NSW, were well rewarded with a sale price of $380 for an April/May drop, September-shorn line of 111 weighing 51kgs..

The sale was conducted by the Corowa Stock Agents Association and was monitored under NSW COVID-19 rules.